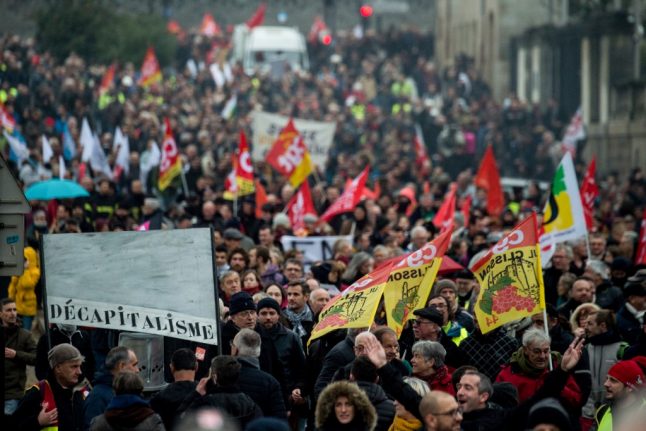 “I’m here to defend the future of my children, grandchildren and great grandchildren,” said Francoise, 76, who was at the march with her daughter Valérie, 59. Photo: The Local

Demonstrations took place in cities across France on Tuesday in the latest round of protests aimed at keeping up the pressure on French government, a day before the PM sets out the eagerly-awaited details of the pensions overhaul.

In Paris 6,000 extra officers were called up and shops, bars and restaurants along the march route were ordered to close but the demonstration took place in a calm atmosphere.

Police feared a repeat of the violent scenes at a march on Thursday, December 5th – the first day of mass transport strikes that are currently bringing France to a virtual standstill.

READ ALSO France strikes: What you need to know about protests and travel disruption on Tuesday On Tuesday, 339,000 people took part in a second day of demonstrations over the government's plans to merge the country's 42 separate pension schemes into  one, according to interior ministry estimates.

While significant, the numbers, which unions claimed were far greater, were markedly down on the first day of the strike on December 5.

On Tuesday the number of demonstrators in Paris was down to around 30,000 although unions claimed there were 180,000 on the streets of the capital.

Heavy police presence outside the ministry a little further down the road. pic.twitter.com/PiJu7xOBje

Some 800,000 striking workers marched peacefully on Thursday December 5th to show their opposition to the French government's plans to reform the country's pension system. But a small group of rioters – many of whom arrived with their faces covered and wearing gas masks – smashed windows and set a vehicle on fire on the march route.

Marie, 66, is #GiletJaune and retired. She participates at the #Greve10décembre because “if we don’t fight back we will lose all the social rights we’ve acquired.” pic.twitter.com/mJh5AUiDty

Tuesday's Paris demonstration began at the Invalides (Place Vauban) in the 7th arrondissement and made its way through southern Paris to Denfert-Rochereau in the 14th.

For some shops the closure order represented a further blow after lost sales due to six days of strike action.

Dewis, the owner a small lunch shop called Salad & Cake said he planned to stay open despite the police warning, as he worried about the financial impact the strike had on him and his employees.

“Our income is slashed by roughly 25 percent every day there’s a strike,” he told The Local.

Still, he was fiercely critical of the government's proposed pension reform.

“It’s a scam,” he said. “The proposed points-based system is just a manner of taking our money.”

Although as a private business owner he doesn’t benefit from any of the French special regimes, he said he didn’t buy the government's argument that the reform was a way of doing away with outdated, luxurious schemes.

“Why doesn’t the government scrap their own special pension regimes?”

Organised by the unions, the marches across France are intended as a display of strength against the government, which is on Wednesday set to unveil more details of its plans to reform the French pension system.

Unions claim the government's reform will simply mean many workers having to work longer and ending up with lower pensions. The official retirement age in France is 62.

On the march were Michel, 53, and Corinne, 46, work for one of France's most radical unions the CGT.
Corinne said: “We're not just here to defend the special regimes, it’s about the reform as a whole.

Not everybody can strike, they’re scared of losing their jobs, so we're striking for them striking for ourselves, and for France. And of course for our children.”

Marie, 66, a proud 'yellow vest' and retired local government employee, said: “For me it doesn't matter, but I'm demonstrating for my children.”
As a 'yellow vest' member, Marie said she didn't necessarily support the unions. She believes in a leaderless, grassroots movement, but said it was important to be there to show that everyone was against the reform.
“We're losing all the rights we have gained. What is happening in France now is very serious,” she said.
READ ALSO French unions: We won't stop the strikes until the government caves

Among the workers marching transport workers, who are on indefinite strikes, as well as teachers and other employees who have staged another one-day strike on Tuesday.