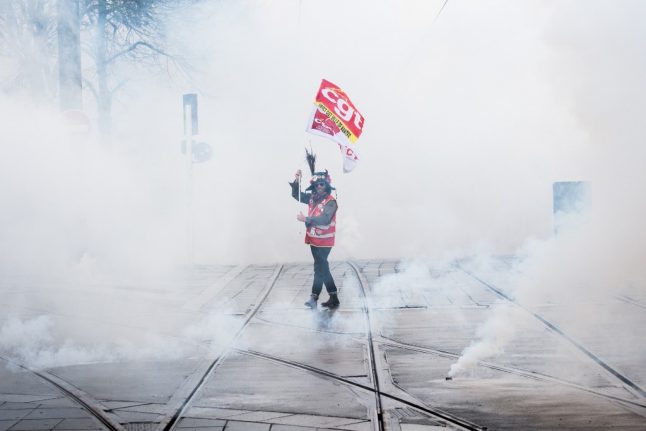 French worker's union CGT promises to be the last one standing in the fight to get the government to backpedal on its pension reform. Photo: AFP

All eyes are on the French government as it prepares to unveil more details on Wednesday about the pension reform, in a bid to dissolve the gridlock that has paralysed most of the country's transport system since December 5th.

The strikes, organised to protest the plans for a single points-based pension scheme, recall the winter of 1995 when three weeks of huge stoppages forced a social policy U-turn by the then-government.

Unions are hoping to repeat their 1995 success and call for a massive mobilisation on Tuesday to put as much pressure as possible on Prime Minister Edouard Philippe before his long-awaited speech on Wednesday.

READ ALSO Strikes in France: What you need to know about protests and travel disruption on Tuesday

So far this government seems unwavering, with Philippe reaffirming to Le Journal du Dimanche as late as Sunday that it won't drop its quest to overhaul the current pension system.

“If we do not make a far-reaching, serious and progressive reform today, someone else will make a really brutal one tomorrow,” the Prime Minister said.

But unions have no intention to back down either, telling The Local that they are prepared to strike for as long as it takes for the government to backpedal.

“The government must go back to start”

“We will keep going until the government caves,” said Benjamin Amar, political spokesperson for the CGT, one of the main unions representing the transport sector, which has been striking since Thursday.

The CGT is crystal clear on that they won't accept anything less than a complete surrender from the government. Although the CGT is known to be the most firm-handed and uncompromising of the unions, all the unions told The Local that they stand firm on the demand that the government “go back to start.”

“After two years of consulting I hope that [the government] has finally understood that this reform was a really bad idea,” said Yves Veyrier, General Secretary of the union Force Ouvrière (FO), referring to the points-based pension system that the government wants to install.

The government says the current French retirement system is confusing, opaque and unfair and wants to introduce a universal system where everybody's pension is calculated in the same way. As stated in their July plan the new, one-size-fits-all system would ensure that “every € earned gives the same rights to all French people.”

But unions fear this would have negative financial and social consequences for France at large.

“It's a scandalous reform that will make everyone work longer for less,” said Francette Popineau, Co-General Secretary and spokesperson of the national teacher's union SNUipp-FSU.

“This won’t stop at Christmas”

French teachers earn less than many of their European colleagues. Whereas the average teacher's salary in France lies at €30,350 a year pre tax, a teacher in the UK would earn €36,247. German teachers’ salaries are much higher, at €48,571.

To compensate for their low salary, French teachers’ pensions are based on their earnings the last six months of before they retire. But the new reform would scrap this system.

Popineau, who previously told The Local she feared the reform would push French teachers into poverty, reaffirmed on Monday that she remains “very skeptical” as to whether the government would make concessions substantial enough to call off the strike.

“This won't stop at Christmas. We are ready to continue after New Year's if we have to,” she said. French Teachers protest what they say are deteriorating work-conditions, outside of Paris in October. Photo: AFP

“It's our job to maintain the anger”

While the transport sector is employing a tactic of full paralysation, the teachers are taking shifts striking to ensure a minimum presence for the children. Only 10-20 percent of teachers were striking on Monday, according to Popineau, but Tuesday is another day of mass-mobilisation.

Popineau said the parents of their pupils remain sympathetic to the strikers for the time being.

“But obviously everyone wants this to stop as quickly as possible. No one likes striking,” she said.

The big question is how long the unions can motivate enough of their their employees to keep going. Each day the employees strike, they lose a day's worth of salary.

Although Monday's numbers were high, with 77.3 percent of the SNCF train conductors striking, it was a slight drop from Friday's 85.7 percent. The RATP however announced on Monday afternoon that they would keep striking at least until Thursday, with one union saying it will continue until Friday and perhaps the weekend, meaning Parisian commuters will have to make due without the Metro for most of the week.

“It's our job to maintain the anger,” Amar said, explaining that the strikers are going 'all in', aiming to apply maximum pressure and block the economy as quickly and efficiently as possible.

“We don't negotiate, we fight,” he said, quoting a CGT slogan.

FO's Veyrier said they were taking it day by day, but that this “was not a question of time.”

“Our goal is to be heard. There is no need for this to go on for years,” he said.

“Saving 'special regimes' is not enough”

All the unions said they are prepared for that the government will employ a strategy of divide and conquer in order to weaken the movement.

“Diviser pour réunir is an old tactic,” Veyrier said, employing the French expression 'divide to unite', which refers to the strategy where the government tries to paint a picture of the strikers selfishly defending their own interests without consideration for the country at large. If the government accomplishes to make the reform about the 'special regimes', they might get the public opinion on their side.

Currently, SNCF train drivers and Metro drivers can retire at 50 and 52 respectively, with the average employee of RATP (which runs the Paris public transport network) getting a monthly pension averaging at €2,357. The official age for retirement in France is 62.

But all the unions said selective concessions will not suffice. Not even if the government caves on their promise to scrap the 'special regimes' and let rail workers keep their existing benefits.

“Obviously we’re opposed to the idea of abolishing the special regimes, but that’s not the main reason we’re striking,” Amar said, adding that the fact that the government could be leaning towards making concessions to certain groups is “proof that the reform is bad.”

“If this was really such a good reform they wouldn't need to reassure people that they would be exempt from it,” he said.

“The only solution is to bin the existing reform. Throw it in the trash.”

EXPLAINED: What are special regimes and why are the French striking about them? Unions expect the government to try and turn the public opinion against them by pinning the strikers as selfishly defending luxurious 'special regimes'. Photo: AFP

That the reform will have a collective negative impact on the country as a whole and not just on the special regimes is a crucial point for the unions to hammer home in order to keep the public opinion on their side.

Before the strikes, opinion polls showed a popular support of around 63 percent. After the first day of striking, the support had fallen slightly, to 53 percent according to an opinion poll published in Le Journal de Dimanche.

But while Thursday and Friday were relatively calm with many choosing to stay home rather than defying the traffic disruption, Monday proved much tenser.

The few trains running were so jam-packed that the SNCF warned of dangerous travel conditions and urged those who could to stay home. Commuters trying to enter the capital by car were trapped for hours in queues measuring 600 km – an all-time-record. On the top of that, anyone opting for a bike was soaked in heavy rain.

But on Monday afternoon unions said they believed that the public opinion remained on their side.

“We all saw how massive the mobilisation on Thursday was,” Veyrier said.

“Look, we know how to do this. Every time we strike we talk to people continuously to hear what they think. And they are not stupid, they know that this reform is bad.”