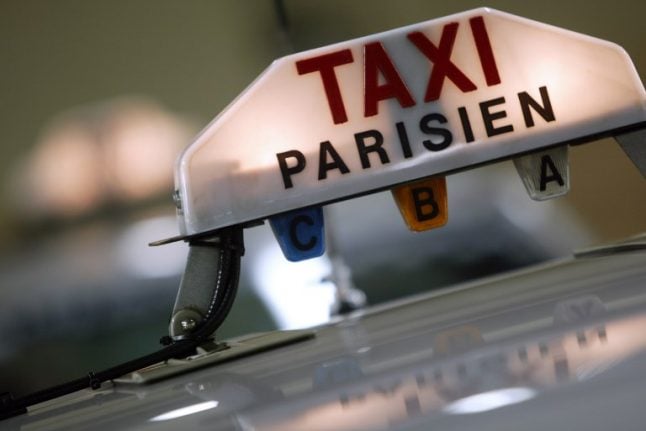 Although most taxi drivers in Paris are perfectly friendly and honest, there are unfortunately some rogue operators, such as the man who landed two tourists with a whopping €247 taxi bill from Charles de Gaulle airport into Paris.

So here’s what you need to know to about taxis in the French capital to help you avoid getting scammed.

If you’re travelling from an airport, both Paris airports have official taxi ranks with staff directing passengers into the next available car.

However many unofficial taxi drivers hang around airports and train stations, including Gare du Nord, to try to pick up customers. Passengers are advised to avoid any offers for a taxi from people waiting at arrivals.

Instead you should head to the official taxi rank or use a ride-hailing app like Uber, Taxify or Chauffeur Privé (there are others too) to reserve a cab.

If you’re travelling around the French capital itself, you can also head to taxi ranks or simply hail one in the street. Look out for taxis with the green light on the roof which means they are free. A red light means they occupied. You are not allowed to hail a private-hire cab or an Uber, known as a VTC (Vehicle de Tourisme avec chauffeur) 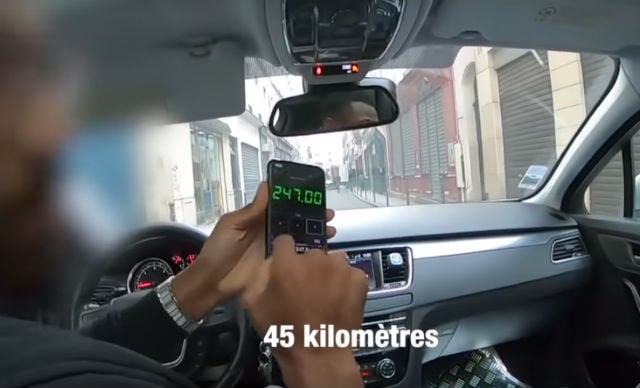 Once inside you will see a metre on a very obvious display in the front of the car.

However unlike in other cities Paris taxis are not a uniform colour or model.

If you’re travelling from the Charles de Gaulle airport to the city centre by an official taxi (not Uber), you’ll pay €55 for a trip heading anywhere on the Left Bank and €50 for anywhere on the Right Bank.

If you’re coming in from Orly airport, it will be €30 for the Left Bank and €35 for the Right Bank.

The government has decided on these fares and there are similar fixed rates for official taxis in Nice, Cannes, Antibes and Toulouse. A full list can be found on their website.

However prices will vary and will often be higher if you use VTCs or ride-hailing apps like Uber and Chauffeur Privé, whose prices are not fixed by the law.

For example a company like Uber says its prices are fixed for trips from the airports to Paris (see table below for fees) however the notorious “surge pricing” – when prices rise due to demand (known as marjoration in French) – means the rides are often more expensive and work out pricier than a normal Paris cab, particularly during a strike when services are very busy.

The fixed tariffs are in place even if it’s a public holidays or weekend, as well as if the journey is at rush hour or it is nighttime.

There are different rates according to the time of day and whether it is a bank holiday or not.

What about private hire cabs/Uber  (VTCs)

Prices for taxi apps and private hire firms can vary according to demand so during strikes the prices tend to rocket.

At least you should know in advance how much you will likely pay.

“If dynamic pricing is not activated during a peak period, waiting times increase exponentially and the number of journeys made drops dramatically,” said a spokesman for Uber to justify the spike in the cost of a trip during transport strikes.

Technically you have to book VTCs at least 15 minutes ahead of your journey although often they are available through the apps much quicker than this.

However it’s definitely not possible to hail one in the street instead it is mandatory to go to the website or mobile app to book.

Taxi drivers will be able to charge for supplementary passengers once the number goes above four, which would mean a cost of €4 per extra passenger.

And there will also be a flat rate for the cost of reserving a taxi from airports in future – €4 for an immediate reservation and €7 if it is booked in advance.

It is up to you if you want to tip but a tip will not be automatically added to the bill.

The minimum price you will pay for a taxi in Paris is €7.10.

A taxi driver in France can refuse payment by cheque however a taxi must be equipped with a payment terminal and, according to the law, payment by credit card cannot be refused.

Even though this is what the law says many taxi drivers will tell you their card machine is broken because they prefer you to pay in cash so for convenience sake it’s best to take enough money on you to pay.

On the other hand, if you’re taking a VTC like Uber you will pay with your credit card or via the app.

Technically you have to book VTCs at least 15 minutes ahead of your journey although often they are available through the apps much quicker than this.

However it’s definitely not possible to hail one in the street instead it is mandatory to go to the website or mobile app to book.

As soon as the cost of a taxi journey goes above €25, the passenger(s) should be given a receipt.

Below this price, it is up to the driver to decide whether to issue a receipt unless the passenger asks for one in which case it should be provided.

Strikes are commonplace in France, and are often highly disruptive, but there are ways to make life run more smoothly during a strike period, including these helpful apps.

If you have any train travel planned over a French strike, then this is the app to keep an eye on. You’ll be able to get up to date information, including traffic alerts, for your journey. You can also book tickets on the app.

The SNCF website will publish traffic timetables 24 hours ahead of planned strikes, and if you have tickets booked SNCF will alert you if your train is cancelled.

With a 4.6 star rating in the Apple App store, this programme will help you find the nearest filling station, and compare nearby options based on price. The app also offers real-time user reports, which can help you avoid long queues. Alternatively, you can download the application “Gaspal” to help navigate to nearby affordable filling stations. The app is available in Spain and Italy as well.

If you’re in a city on a strike day, it’s likely that public transport will be disrupted – but there are other transport options including hiring a bike.

Most major French cities have public bike rental options controlled through an app – Le Vélo in Marseille, Vélo Bleu in Nice, and Vélo-V in Lyon.

In Paris, the primary choice would be Vélib which was launched in 2007. With over 1,400 docking points across the Greater Paris area, Vélib stations are usually easy to find. You can also opt for an electric bike (these are coloured blue, instead of green).

You can rent the bike for 45 minutes for just €3 or you can consider a 24-hour rental, which would cost €5. Normally, at the Vélib station you should be able to enter your credit card information and make an account, but if that is not available then you can do so online.

READ MORE: How to stop worrying and learn to love French strikes

Keep in mind that during strikes, bike-hire services are in high demand so it may be difficult to find an available bike. The application offers a mapping service to help you find available bikes and parking spaces across the city.

If you’re in a city, the other option is to walk, so it’s a good idea to stock up on map applications before a French strike. These will help you find the fastest way to get around, though you will want to have more than one downloaded to help double check that the information is correct.

This is the city of Paris’ metro system application. You can map out your trip and you can also check the “Traffic” update to see which lines are running and which are impacted by disruptions. The application Île de France Mobilités covers the whole of the greater Paris region.

If you are planning to visit other French cities during a strike, it is also worth downloading their local transport applications to get the most up-to-date information. If you plan to visit Lyon, the app “TCL” will give you city-specific information. Similarly, when visiting Bordeaux you can build your itinerary with the app “TBM” and for Marseille you can download “RTM.”

While Uber might be the rideshare app you would normally opt for, using an alternative may be better during a strike when there is high demand. Services may be more expensive than usual, as well as being in high demand, so having a few applications, such as Bolt, Heetch, or Marcel may help you to find a rideshare faster and for a better price.

If you are planning to be in Paris, and you need to get somewhere by a designated time, you may want to consider booking a taxi in advance. One way you can do this is with the G7 app, which connects you with an official Paris taxi – the same ones that you can hail in the street, but the app allows you to book up to 30 days in advance, so it’s handy for late night or early morning airport runs. It also has an option to select ‘pet friendly’ if you’re travelling with an animal.

Payment works in the same way as Uber – users save their credit card information on the app and therefore do not need to pay on board.  At the conclusion of the ride, the fare will be charged and the user will receive a voucher by email.

This translation app might be a lifesaver for you during a French strike if you are feeling less confident about your language-abilities. It is quick and has a microphone, so it can play your translation aloud too. You may also consider the Google Translate app.

You can keep up to date with all strike-related information both on The Local’s website at the dedicated “strikes” page, and on our mobile application.

This website allows you to see any ongoing or future strikes to take place in France.

This traffic website offers detailed predictions for slowdowns on French motorways, as well as tips for which roads to avoid.

This French government website offers an interactive map to help you keep track of fuel prices and availability across the country, which is especially helpful during nationwide strikes.