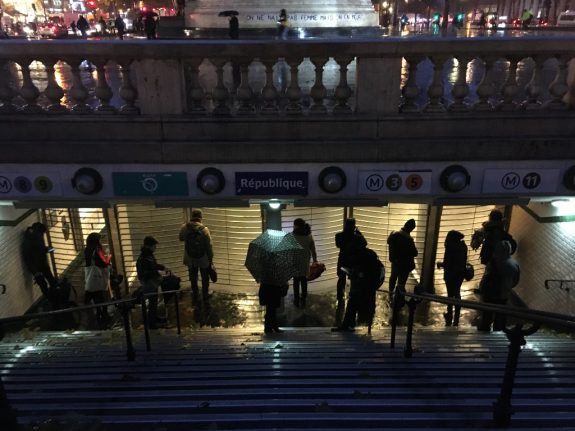 What are the strikes all about?

The strikes are over proposals by the French government to reform the country's pension system. The government says the current system – with 42 different regimes – is confusing, opaque and unfair and wants to introduce a universal system where everybody's pension is calculated in the same way.

The unions claim the reform, which will be presented by the government on Wednesday, will require people in both the public and private sector to work longer for a smaller retirement payout.

The legal age of retirement in France is 62 and while the President Emmanuel Macron has vowed not to raise the official retirement age, his PM Edouard Philippe has said the French “know that we will have to work a bit longer.

READ ALSO EXPLAINED: What are special regimes and why are the French striking about them?

There are many different unions involved representing different types of workers, but the ones that are having the greatest impact on daily life in France are the transport workers. Mass walk-outs from SNCF workers have seen about 85 percent of trains cancelled, while public transport services in Paris and other cities have been severely disrupted.

But other employees are taking action too, including teachers, EDF workers, postal workers, notaires, civil servants and hauliers. While the transport workers are generally opting for unlimited action, many public sector workers took part in a one-day walk-out on Thursday December 5th and many more will be walking out on Tuesday, December 10th when unions have called for another day of mass protest.

What is happening this week?

Transport services, particularly rail and Paris public transport, are still badly affected on Monday and likely to remain so on Tuesday.

Tuesday is the day that unions are calling for another day of mass walk-outs so we could see more disruption and more schools could again be closed.

Civil aviation authorities also announced that some 20 percent of flights will be cancelled to and from airports in France. That will likely mean hundreds of cancellations with flights to airports in Paris, Beauvais, Lyon, Marseille, Toulouse and Bordeaux all affected.

There are also likely to be protests and marches across the country similar to those on December 5th. Over 800,000 people took to the streets on the first day of the strike with unions hoping Tuesday's marches will be just as big if not bigger.

And on Wednesday Prime Minister Edouard Philippe will finally unveil details of the government's reform, and we will have a greater understanding of whether compromise can be reached on the proposals that would bring the strikes to a close.

Is a compromise likely?

At the moment both sides are talking tough.

PM Edouard Philippe told French newspaper Le Journal du Dimanche: “If we do not make a far-reaching, serious and progressive reform today, someone else will make a really brutal one tomorrow.”

But the unions don't sound in the mood for compromise either.

“The only solution is to bin the existing reform. Throw it in the trash,” Benjamin Amar, political spokesperson for the hardline CGT union told The Local.

Small or selective concessions will not suffice, Amar said. Not even if the government caves on their promise to scrap the 'special regimes'.

“It's the whole reform that needs to go. After that we'll be ready to sit down with the government and help them come up with a new and better plan,” he said.

When will they end?

We don't know at this stage. It's probably unlikely that enough of a compromise can be reached by Wednesday to end the strike there and then, but some progress made

One of the French rail unions has previously said they expect to be “eating the Bûche de Noël together on Christmas Day” while a political analyst previously told The Local that the action could continue until the New Year.

In 1995 mass strike action erupted against another effort to report the French pension system and that lasted three weeks until the government backed down.

What generally happens with long-running strike action in France is that it tends to get less disruptive as time goes on as many of the striking workers – who lose a day's pay for every day they strike – go back to work.