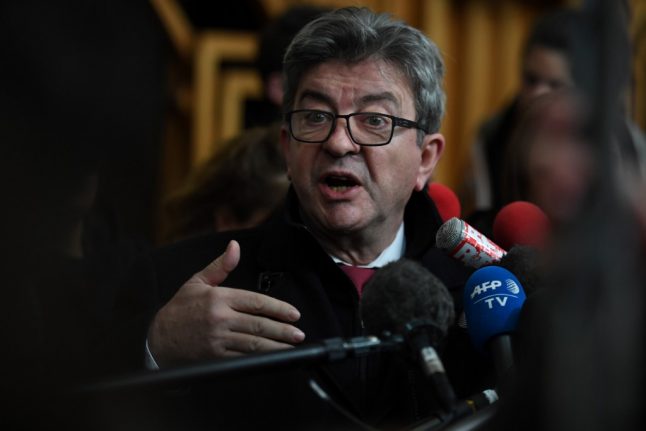 Melenchon, leader of the France Unbowed (LFI) party, was convicted on charges of rebellion and provocation by the court in Bobigny outside Paris and ordered to pay a fine of €8,000.

“This is a political judgement,” Melenchon said as he left the courthouse, saying he had hoped to be acquitted. He also expressed irritation at having to deal with the issue while backing the strikes against the pension reforms planned by President Emmanuel Macron.

David Lepidi, the lawyer for the police, which was a civil party in the case, said  “this affair was not politicised” and criticised the “putting in place of a smokescreen for propaganda”.

Another LFI lawmaker, Alexis Corbiere, was acquitted but its MP Bastien Lachaud, MEP Manuel Bompard and spokeswoman Muriel Rozenfeld were also handed fines of up to €7,000.

Melenchon had shoved a prosecutor and an officer in a fit of rage over police raids to search his home and party headquarters.

The searches had been carried out as part of two investigations – one into the party's use of European Parliament funds, the other into the funding of Melenchon's 2017 presidential campaign.

“The Republic, it's me, I'm the one who is a parliamentarian. Get out of the way and open up this door,” an apoplectic Melenchon shouted at the policeman standing guard outside before proceeding to try to ram the door open at his offices.

A political veteran famous for his tirades against globalisation, German Chancellor Angela Merkel and elites, Melenchon enjoys a cult following among leftists but is seen as a polarising figure on the centre and right.

A slew of prominent French politicians are currently facing legal probes, notably former prime minister Francois Fillon, who will go on trial on February 24 on accusations of creating a fictitious job for his wife paid for by public funds.

Far-right National Rally leader Marine Le Pen and her father, Jean-Marie, both longtime former MEPs, have both been charged with misuse of public funds in connection with salaries paid to dozens of EU parliamentary aides.

And French veteran centrist leader Francois Bayrou as well as former defence minister Sylvie Goulard have been charged in a case related to the embezzlement of European Parliament funds.