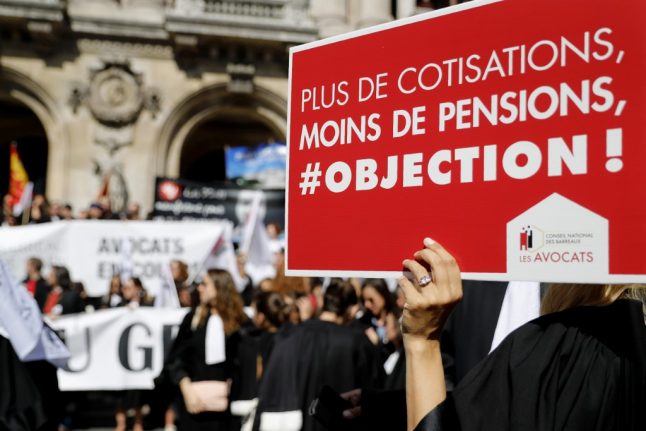 President Emmanuel Macron's government say they are unfair and unnecessarily complicated, the unions say they are a vital recompense for difficult or strenuous work.

The idea of 'special regimes' for pensions – whereby some workers get bigger pension pots and retire earlier than others – has become a key battleground of attempts to reform and streamline the French pension system, which are currently being fiercely resisted by French unions. But exactly what are they and why have they become so controversial?

What is a special regime?

There is no official definition of a 'special regime'. The term is really an umbrella expression to explain which of France's pension regimes – and there are currently 42 different regimes – have similar benefits attached to them.

According to the Code du travail, there are 10. However the Social Security Commission listed 11 “special and assimilated regimes” and 15 “other special regimes” in a report from September.

In addition to the ‘special regimes,’ there is a category called “active civil servants,” comprising police, border police, nurses and prison guards. These groups also retire earlier than the rest of the population, their legal retirement age ranges from 50 to 55.

How many people are we talking about?

Of France's 17.2 million pensioners, 1,1 million (6 percent) belong to a special regime, according to the 2019 report Les retraités et les retraites ('Pensioners and Pensions'), published by the French Research Directory of the Ministry of Solidarity and Health.

People belonging to a special regime as defined by the Health Ministry's report are: Why are the special regimes so controversial?

Most commonly associated with the railway and transport sector, critics say the special regimes are too generous and unsustainable, as well as being unfair.

For example SNCF train drivers and Metro drivers can retire at 50 and 52 respectively, with the average employee of RATP (which runs the Paris public transport network) getting a monthly pension averaging at €2,357. The official age for retirement in France is 62.

Wait, do the people in special regimes retire at 52?

“This is a myth,” said Justin Bernard, a member of the citizen’s collective Nos Retraites, ‘Our Pensions’, created this summer by a group who believed the information about how the reform would impact French society at large was lacking and set out to fill the gap.

Bernard is a civil servant and ‘Justin Bernard’ is a pseudonym to protect his identity. What people often miss when slamming the special regimes, he said, is that there is a difference between the “legal age” and the “real age” for when someone retires.

In reality, they retire a couple of years after. According to a 2017 report published by the French Court of Audit, employees of the RATP and the SNCF retire at 55.7 and 56.9 years respectively. SNCF train conductors are among the people who may retire the earliest in France. Photo: AFP

Nicolas Baverez, an economist, historian and author, said this is still too early for people to retire.

“A TGV conductor isn't inhaling coal all day,” he said.

Although he agrees the French pension system needs a real overhauling, Baverez said the government has made a '”crucial political mistake” in attacking the special regimes when talking about the reform, because the groups belonging to them to them have so much power.

“They are the only ones with the ability to paralyse the country,” he said, referring to the ongoing transport strikes.

France, like all European countries, is struggling with an ageing population. But the average French person retires at 60, three years earlier than elsewhere in Europe, and four years before the average for wealthy nations in the OECD.

“We need to work longer because we live longer,” Emmanuel Macron has said when asked about the reform.

Baverez said the French retirement age needs to be pushed back.

“We need to progressively reform the system to ensure a sustainable economic model that can carry an ageing France,” Baverez said.

“But we can't put everyone under the same rule all at once.” What will the reform do, concretely?

This is where it gets tricky. No one really knows what the consequences of the reform will be, as it is still in the consultation stage.

The government has said the new, one-size-fits-all system would be point-based so that “every € earned gives the same rights to all French people,” as expressed in their plan published in July.

This is why the country’s largest teacher's unions also participate in the strike. They say they fear the new system would penalise people who have been through a period of unemployment, taken a career break or started on a very low salary. Protesters dressed a puppet dressed as a crucified teacher to emphasise their worries regarding the government's new pension reform. Photo: AFP

So the reform won't only impact the special regimes?

The reform affects everybody who works in France.

This is the “biggest misunderstanding of all,” according to Michaël Zemmour, a lecturer at the Economic Center of Sorbonne at the Paris 1 University who specialises in the French welfare state.

“In French we call it diviser pour réunir (dividing to unite),” Zemmour said.

Pinning the reform as a 'special regimes' reform is according to Zemmour a “conscious strategy” the government is using to turn the public opinion against the strikers.

“If the government can convince people that the reform will only affect a group with an advantage they themselves can't access, they might start backing the reform,” he said.“We have never had a reform that concerns this many people. Everybody will be affected,” he said.

Baverez said the government's strategy had backfired. Although he doubted that France at large was feeling particular sympathetic towards the rail workers, he said that the confusion surrounding the impacts of the reform had sown a general sense of fear that had now spread out to the entire population.

“Everyone is scared,” Baverez said.

“The government needs to come up with a solution quickly, otherwise it's not looking good for them.”