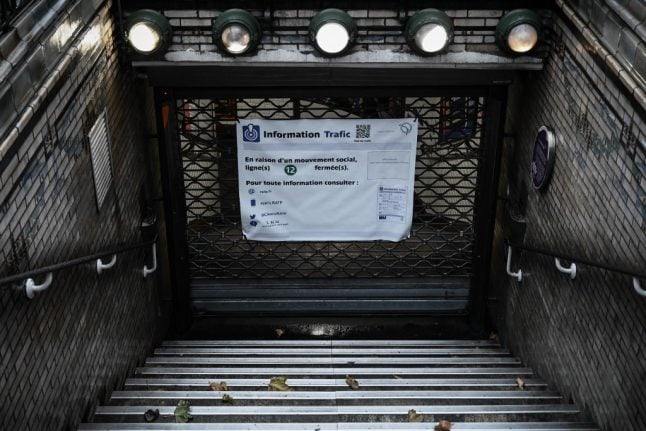 The largest union on the Paris transport network RATP has announced it will be continuing strike action until “Friday inclusive” and has not ruled out action at the weekend.

The union did not rule out “a continuation of the strike next weekend and the following week”, as long as the government does not abandon its pension reform project.

READ ALSO French transport strikes – what happens next and how long do they last?

Other unions representing workers on the city network have set “Thursday inclusive” as their latest strike date.

In reality the action may continue after that if unions and the government cannot reach a compromise on the issue of pension reform, which the cause of the nationwide action.

Unions fear that will leave workers out of pocket and working longer, although Macron has pledged not to touch the legal retirement age in France which is 62.

In general the French public have been sympathetic to the strikers, with public support of 60 percent before the strike started and 53 percent in a poll conducted more recently by the Journal du Dimanche.

However in Paris on Monday, commuters that The Local spoke to were starting to sound rather fed up.

Office worker Isabelle, 29, said: “It’s paralysing the whole country. I can’t support the strike in such conditions. It is a nuisance for people who have to go to work”

Pensioner Dominique added: “It's a shame for people who need to commute to work.” while Canadian tourist Mario said: “It makes everything complicated to move around inside Paris”

But there were also people who supported what the strikers were trying to do.

Sandy, a private school teacher, said: “They are fighting for their pensions and mine as well” while fellow teacher Zoe added: “They are right. People should fight for their demands. They should carry on.”

For all the latest breaking news and travel updates, head to our strike section here.