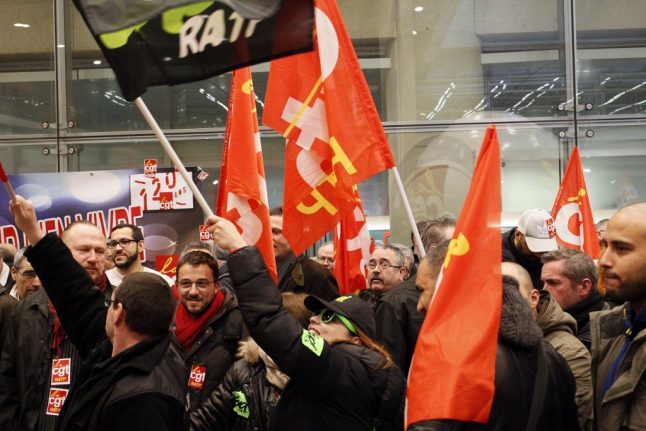 The strikes are likely to lead to major disruption. Photo: AFP

The first declared strike day was December 5th, but many unions say they are planning to stay out longer, for weeks if necessary. How long it will last and who will blink first are the questions that dominate the discussion, with some saying that things could become as bad as 1995. In that year – the very first year of Jacques Chirac’s presidency – the government tried to push through a pension reform. The reform, which would do away with certain special regimes and increase the retirement age some public sector employees, became wildly unpopular. But the government had not foreseen the stir it would cause. The French would have none of it. Hordes of people took to the streets in mass-protests of sizes unseen since the May 1968 movement.

After weeks of organised walk-outs, the government dropped the plan. Since then, no French government has dared to radically overhaul the country’s complex retirement system.

“This is a very difficult situation for Macron because he has put so much political weight into this reform. Going back on it would be an enormous loss,” said Bruno Cautres, a political scientist who researches political behaviour in France at the think tanks CNRS and CEVIPOF and teaches at the Paris Campus of the Sciences Po University.

Since the workers on the Parisian public transport system (RATP) called for the December 5th strike, one union after another announced that they too will join the walk-out – and that they intend to stay out if need be.

“This is an explosive moment. So much is at stake for both sides,” said Stéphane Sirot, a French historian who specialises in strikes and unions.

What is at stake?

Macron’s reform, which aims to simplify the complex French retirement system by fusing 42 different regimes into one single regime, will have consequences for the public sectors who until now have enjoyed special retirement regimes to compensate for difficult working situations.

Sirot, who lectures in political and social history at the University of Cergy-Pontoise, said the current situation resembles 1995 more than anything else seen in France over the past years.

Who will win the battle depends on whether or not strikers manage to make use of the December 5th momentum and transform the protest into a national, lasting movement. Sirot refers to the phenomenon known as “proxy striking,” a decisive factor during the 1995 strikes. Back then the majority of French people supported the strikers, even if they didn’t themselves participate.

Sirot says the government will do its best to sow division, painting a picture of the strikers as selfish in an aim to turn the public opinion against the movement.

On Friday, Macron referred to the December 5th movement as “dominated by employees of big transport businesses” with “categorical demands that would penalise the society at large.”

READ ALSO: Who is joining the December strikes and what are their grievances? Every penny will count

But the government’s pension reform won’t only affect those working in public sectors and who are currently enjoying special benefits.

“This reform will have a very negative impact on a lot of people,” said Cautres.

Today, public sector workers’ pensions are calculated on the basis of what they earned during the last six months of their career. For the majority working in the private sector, the pension is based on the 25 best years of their career. With the new system, every year of work will count.

This means that a teacher who worked years with a low salary will see their pension significantly decrease. The same will be the case for someone who went through a period of unemployment, or had to work part-time for a period of time.

Six out of 10 support the strikes

For unions the key to success is to convince the broader French population that they too will suffer from this reform. So will they manage to force Macron’s hand?

“Right now it’s not looking good for the government,” said Cautres, pointing out that French opinion today is dominated by a feeling that “everyone will lose” as a result of the reform.

Six out of 10 people said they support the December 5th strike, according to a poll published by La Tribune, Orange and RTL last week. The most avid supporters were manual workers (74 percent) and those working in the public sector (70 percent). Among executives and those highest educated, respectively 45 and 42 percent saying they support the strikes.

Although public opinion is currently in favour of the strikers, this could change as soon as people start feeling the direct impact the strike has on their daily lives. But both Cautres and Sirot said that if the strikers are to be successful, they will need to keep up the pressure.

French people strike more than any of their European neighbours. Between 2010 and 2017, the number of French strike days was 125 per 1,000 employees, according to a study by the European Trade Union Institute. As a comparison, the UK, Germany and Sweden had 20, 17 and 3 respectively.

The reason – according to Cautres – is that the French model lacks a system of dialogue and bargaining that exists in other countries. This partly explains why everything points to full-on conflict in December. The unions, who have fought the reform for two years, insist the strike is a ‘last resort’ to force the government to the negotiating table.

“We can expect a period of major transport disruption that could last until the New Year,” said Cautres.

“Protesters know that if they push very hard, they might change the government's mind.

Sirot too said he expects an ‘all or nothing’ strategy – either maximum pressure or talks. This excludes the tactic of ‘interval striking’, where unions organise walk-outs on selected days for a certain period of time. Transport workers employed this strategy last year, but according to the historian the largely unsuccessful tactic that hasn’t worked for 25 years. (It didn’t work last year either.)

Who will blink first?

Sirot, who is hoping the parties will go into negotiations soon after the 5th, said the best outcome is a compromise between both parties, where no one loses face.

“None of them will want to give in,” Sirot said. The government because it has invested so much political prestige into the pension reform. The unions because they have put an enormous effort into mobilising against it.

The other option (a full-on conflict) he sees as more dangerous.

“No one can win this, he said.

“If people lose trust in unions, we lose an important buffer between the power and the street,” he said, pointing to last year’s 'yellow vest' protests, where the protesters originally declined all forms union representation.

France is the country with the highest number of trade unions but the lowest percentage of union membership. In France the number of workers in unions stands at around 8 percent whereas the average in the rest of Europe is around 25 percent.

Cautres points to another factor: how violent will it get? A high level of violence could decrease the level of sympathy towards the protesters, but it might also increase the public resentment towards the government.

Only one party, currently hissing from the sidelines, would benefit from a long-lasting conflict.

“In the long run, the only winner is the far-right,” Sirot said.

“They are the only ones left who haven’t yet been in power yet.”