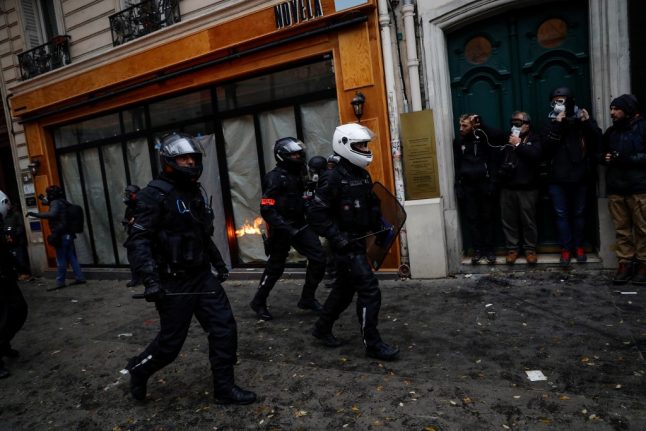 The tensions broke out close to the place de la Republique square in the east of Paris, where thousands had massed to protest planned pension reforms.

A construction trailer was overturned and set on fire, sending a huge plume of smoke into the sky. Thousands of other marchers continued on in peace towards Place de la Nation.

Authorities say 65,000 people joined the march in Paris while unions said the figure was 250,000.

The union organised march through Paris was a show of solidarity as thousands of public sector workers want on strike, bringing France to a virtual standstill.

Thousands of striking workers and union activists converged on the capital, along with off-duty medics, firefighters and police officers who are barred from striking but who are demonstrating in sympathy. It took place amid heightened security with an extra 6,000 police officers on duty in the capital.

They then overturned a construction trailer and set it on fire, sending a huge plume of smoke into the sky.

Union marches in France are not generally violent, but police had feared disorder every since 'yellow vest' groups announced they would be marching alongside the strikers in sympathy.

Important to distinguish between great bulk of demonstrators and a minority of trouble-makers. The latter are attacking not just Macron but whole concept of peaceful or democratic protest.

The 'yellow vest' anniversary in Paris in November saw a group of about 200 masked black-clad youths smashing up the Place d'Italie.

Mindful of this, police have ordered all shops, bars and restaurants along the route of the parade – which runs from Gare de l'Est to Nation – to close and stay closed until 7pm.

There were around 6,000 extra officers deployed to the capital to keep order.

“I want a revolution.” Marijane is #GiletJaune and convinced that French unions need them to get anything done. pic.twitter.com/v5BkNJH1eR

In all there were around 235 marches in towns and cities across France. By midday authorities recorded 180,000 demonstrators across the country but that figure did not include the marches in Lyon, Marseille and Paris.

Among the marchers in Paris were two 'yellow vests' who had joined the protest.

Marijane told The Local: “We want to change the world – we're tired of a small handful letting the little people die.

“We want revolution.”
On the subject of violence, they said: “Certainly there will be violence. There is a call from the Black Bloc, who come from all different countries. But we are the hostages because they are going to blame us.”

Laurence, 55, who works at the Pôle Emploi unemployment office said: “It's always a good thing to revolt and be a player in the drama.

“Retirement, the nearer you get, the further away it gets. And especially for women. And with this reform, it will be even less favourable to women.”
Régis, 28, told The Local that the reforms would cut pensions, but also force workers to work for longer before retirement.

Regis, 28, from @nosretraites explains why he’s against the reform in three simple steps. pic.twitter.com/fW6coM02dt

Despite the tight security, the vast majority of people on the demo were ordinary workers who wanted to display their opposition to pension reforms which they feel will leave them worse off,  but there was also some anger at what is seen as cuts to public services.

Many of the people present at the protest were people who had already retired, and who worried that their children and grandchildren would be worse off than themselves in the future.

Pierre, 80, had hung a poster of Emmanuel Macron around his neck where the President had been given a makeover to resemble Dracula, saying “Pensioners, I will make you bleed.”

Insisting he was (bloody) serious, Pierre said he worried for the future of his grandchildren.

“It's the young people who will suffer,” he said.

Pierre started working at 14 and participated in the social upheavals of May 1968.

“They want to take away everything we fought for,” he said.

In the middle of the masses of people who had gathered between Place de la République and Gare de l'Est, a small bespectacled woman handed out flyers with the slogan “Rêve Générale,” 'General Dream', a wordplay on the expression “grève générale,” or 'general strike'.

Nicole worked at Prêt-à-porter, a French clothing store. Her husband Gilles, 72, a retired photographer, said he too had a “shitty pension.”

Gilles said they were there to make people “wake up.”

“Of course this is about Macron, but it’s not just him. The whole system is unfair,” he said.

Around the country most demonstrations took place in calm atmosphere although images posted on social media showed clashes in Bordeaux, Montpellier, Nantes and Rennes.
This was the scene in Montpellier where thousands marched. And there were similar scenes in Perpignan.