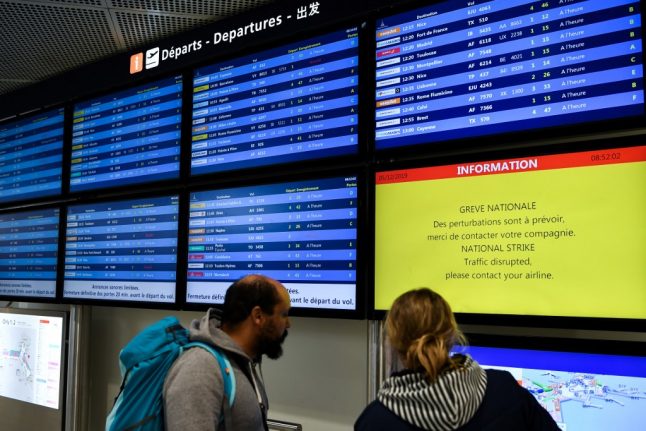 The first day of unlimited strike action in France brought widespread chaos to transport across France, with thousands of trains, buses, trams and Metro lines cancelled as workers walked out.

But in contrast to the tourists expressing their frustration, many Parisians on their morning commute remained supportive of the aims of the strikers.

The nationwide strike has been declared in opposition to government plans to reform the French pension system – an issue that affects everyone of working age in France.

And despite being frustrated by the transport difficulties, many people in Paris said they supported the aims of the strikers and respected what they are trying to do.

Librarian Aline Ferrault was making her way to work by bike when she spoke to The Local.

She said: “I support the strike. I understand that they are on strike because they are in a difficult situation and their work is difficult.”

She added although she supported the idea of pension reform, she did not think the proposed reforms were the right ones.

Aline is a librarian in Paris who is biking to work for the first time today (9km). She’s skeptical towards the governments pension reform, saying «changes are needed, but not like this ». #grevedu5decembre pic.twitter.com/7Tpsdrm0Oj

Engineer François Guillemet said: “I support the strikers in their aims but I think we need more discussion, that is always the best way to find compromise.”

Sales manager Arnaud, 30, works in the private sector but said he was striking in sympathy for the public sector workers.

He said: “If people really knew how this reform would impact them, they would all be out in the street.”

A group of French teenagers making their way through Les Halles station said: “We're not too worried, it's a long time until we retire, but our parents complain.”

One added that her mother – a nurse – was taking the limited industrial action that is permitted to emergency services.

Parisian buses carry a heavy load today with most of the metros not running. As these people tried to squeeze themselves on the bus, five more people carrying suitcases with desperation written on their face came running.. pic.twitter.com/9lU0r00lDu

National polls have consistently shown support for the unions in their battle, and if they can retain public sympathy union leaders will feel more able to continue their actions for days or weeks.

Among the people trying to travel from Les Halles station was Alain Levabasseur, a retired Metro employee and long-time member of the CGT union who was among those who took to the streets in the major strike action of 1995.

He told The Local: “In 1995 there were no automated Metro lines [Metro lines 1 and 14 are automated so run as normal on strike day] so the disruption in Paris was much worse.

“But the other main difference between now and 1995 is that people are different, young people especially have less solidarity.

“I hope there will be enough solidarity to keep this action going, because there is a lot of misinformation from the government who are trying to present the demonstrators as violent.

“I hope so because this is an unjust reform – it tries to put SNCF employees on the same level as Amazon workers.

“No social progress has ever been given for free and we must respect the progress that has been made before and not throw it away.” French workers enjoy strong rights on issues like unfair dismissal, working hours, holidays, sick pay and pensions and most French workers are aware of the connection between a strong union movement and the rights they enjoy in their working lives.

The pension reform that French president Emmanuel Macron wants to introduce involves doing away with the 42 different pension regimes currently in operation in France and replacing them with one universal system for both public and private sector employees.

The government argues that the current system is a mess and a universal one would be transparent and also more fair to all.

But public sector employees are more likely to lose out as many of them enjoy 'special regimes' negotiated over the years between governments and unions that give them higher pensions and the right to retire early.

Unions says these rights make up for the fact that public sector employees often get lower pay and are more likely to work anti-social hours or in polluted or risky conditions, and early retirement is a recognition of this fact.

But not everybody was so understanding. One American man who has lived in France for 20 years said: “There are always demonstrations and strikes.

“This one is ridiculous, because it’s all about railroad workers not wanting to retire at the same time as everyone else.

“They got these privileges at a time when they were shovelling coal, but now 85 percent of the people working at the SNCF sit in front of the computers.

“It's part of the French culture, they hate seeing their social security going. I’m hoping it lasts only today but I worry they might keep it going for longer.”