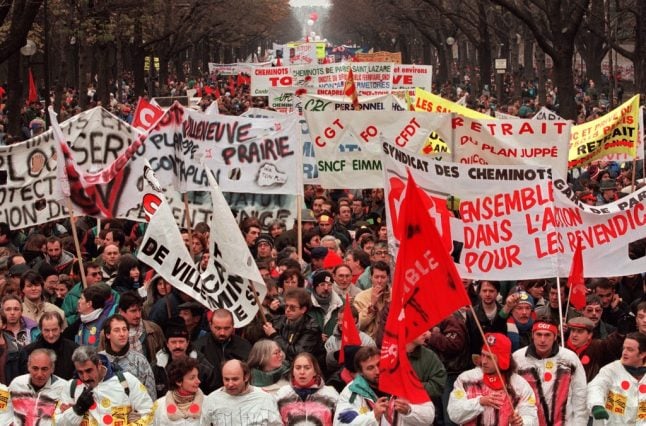 The stoppages on the railways and on the Paris Metro are “renewable”. In other words, they could go on for several days – or several weeks – as strikes on the same issue did in 1995.

What is the sinister threat to the French way of life which justifies such disruption in the depths of winter? President Emmanuel Macron wants to replace 42 state pension regimes with a single system. Protesters calling for the 'spirit of 1995' when previous pension reform attempts were blocked by strike action. Photo: AFP

The changes will not take effect for more than five years. The government is urgently considering ways to delay the impact further.

There will be both winners and losers from this slow-motion reform. We hear mostly from the losers.

They include railway and Metro workers who have sweetheart deals which allow some of them to retire at 52 (thanks in part to de facto subsidies from people who work longer).

Lawyers, doctors, nurses, teachers, pilots, flight attendants, police officers and firefighters also want to hold onto their own efficient, state pension schemes. They fear that they will lose out if they are forced to pool their funds with other less successful regimes.

There are good arguments for reform. The present system is an opaque jumble of rules and exemptions in which the poor sometimes pay for the rich. Women with families, the self-employed and farmers do badly. Switching professions, and therefore pension schemes, can be a nightmare.

France, which has an official retirement age of 62, needs to work longer. Individual French people work hard but France, as a whole, puts in fewer productive hours than any other OECD country. Early retirement is one of the main explanations.

There is, however, no blazing pensions emergency. There have been five sticking-plaster reforms in the last 25 years, which have kept state pension deficits more or less under control.

READ ALSO France December strikes – who is joining in and what are their grievances? The unions are preparing for a major conflict. Photo: AFP

Why bother with such a thankless and explosive reform when France has so many more urgent problems to tackle?

Macron is defying the rules of prudent politics-as-usual. He is risking the second half of his presidency on a much-misrepresented idea which will bring no benefit to the country, or himself, before the presidential election in 2022.

Ah yes, say the Macronistas. That is why the present, absurd and inefficient system has been allowed to survive for so long. Previous governments have not had the courage or vision to push for radical change.

The President is not a politician. He is a would-be revolutionary, a young man in a hurry, an intellectual who thinks beyond the normal box of electoral politics.

He detests drift and do-nothingism. Reform the European Union for the 21st century and annoy the Germans? Too bad. Reform the French pension system and annoy railway workers but also lawyers, nurses and doctors? Same struggle, comrade.

The problem is that, in a democracy, it is not enough to be on the right side of history. The government has to make and win a case for reform – especially a reform with no pressing  justification.

President Macron and the Prime Minister Edouard Philippe have muddled and confused the arguments in the last three months. They have annoyed not just the do-nothing unions like the CGT but the moderate and reformist union federations like the CFDT. (France has 12 different TUCs remember).

They have found no way to square the circle of seemingly contradictory promises made by Macron during the 2017 campaign: the official retirement age of 62 will remain, he said; pensions will not be cut; contributions will not be raised. There is a danger that the pensions dispute will merge with ongoing protests by medics and students. Photo: AFP

Macron abandoned in September the idea of having a new “pivot” age of 64 – when people could retire earlier and take a smaller pension or earn a larger one by carrying on. The PM Edouard Philippe has now revived the idea.

The government originally said the reform was driven by fairness and common-sense, not by the need to save money. A disputed report now suggests that the system will be €17 billion in annual deficit by 2025.

The Elysée floated the idea of a “grandfather clause” to defuse union opposition. Those in work, or who join the work-force up to 2025, would retain their existing pension rights. Newcomers after 2025 would join a new, universal system

This would have meant, in effect, that instead of 42 state pension regimes France would have 43. The grandfather clause has now been buried after a cabinet revolt – to the annoyance of some unions. Some form of additional delay beyond 2025 may yet re-appear as a solution to the dispute.

The government is trying to make the case that the December 5th strikes are a selfish defence of early retirement deals which can no longer be justified. Fair enough. But it has failed to make, let alone win, the case for a universal pension system.

The danger for Macron is that the pension dispute will merge with two other rising tides of anger. Hospital workers are demanding higher wages and more investment in emergency wards. Students are protesting against low cost-of-living grants and expensive accommodation.

It’s not yet clear whether the country is in the mood for the kind of confrontation which brought the government, and country, to its knees in 1995. Social anger, like winter ‘flu, can be contagious.

Despite the decline of the Gilets Jaunes movement, Macron could face a second winter of discontent more damaging than the last.