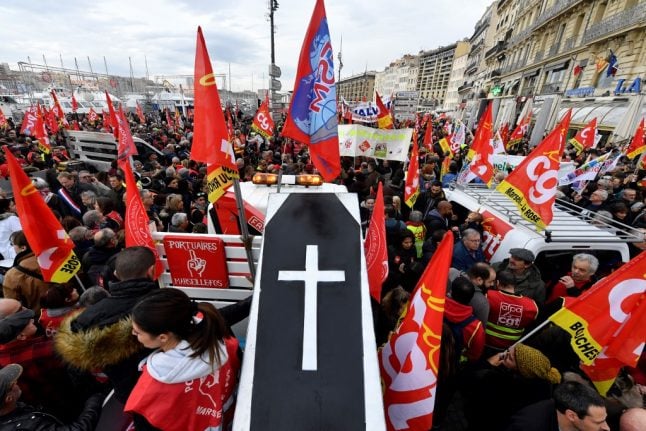 The huge nationwide strike began on Thursday and is set to rumble on for days if not weeks with unions and the government at odds over controversial pension reforms.

The strikes were said to the biggest since 1995 and left trains and transport in Paris at a virtual standstill while cities and major routes across France saw widespread disruption. A deserted platform at Gare du Nord which would normally be teeming with commuters. AFP

This was the scene at Saint Lazare station in Paris early on Thursday morning.

Those Metro stations that were open allowed passengers to walk through without paying. The lack of trains and Metro services in Paris meant many commuters were forced onto two wheels to get to work.

Haven't seen so many cyclists in Paris since…. well the last Metro strike back in September. Two Parisian cyclists just crash into one another in front of me. “Sorry Im not used to this,” says the elderly man. “Me neither,” said the young woman. “We are all in the same mess'' pic.twitter.com/dSR2cJmNHC

Workers in Paris take to bikes, scooters and even skateboards to get to the office this mornin. And many more walking on a bitterly cold day. Big police presence at Gare Du Nord for protest later on Thursday. #grevedu5decembre pic.twitter.com/KsikwvchAv

Haven’t seen any empty velib stations yet, seems like team @Anne_Hidalgo has been preparing for this. pic.twitter.com/VIPVQSTegR Although it was proving hard to get on to some buses in Paris.

Parisian buses carry a heavy load today with most of the metros not running. As these people tried to squeeze themselves on the bus, five more people carrying suitcases with desperation written on their face came running.. pic.twitter.com/9lU0r00lDu

But while we might have expected chaos on packed trains and commuters crammed on to any available service, many noticed how empty many trains and Metro services were.

Flights were also hit with airlines asked to cut around one fifth of their services to and from France. Hundreds of easyJet, Ryanair, Air France and British Airways flights were grounded.

Here people wait at Orly airport to find out if their flights has been cancelled. Union-led demonstrations against the government's pension reforms got underway in cities across France on Thursday.

This image was taken in Marseille. There were also big demonstrations in Rennes and Nantes in the west as the images below show.

Roads were also affected by the disruption with protesters staging blockades and operation escargot (rolling roadblocks) on several of the country's major routes.