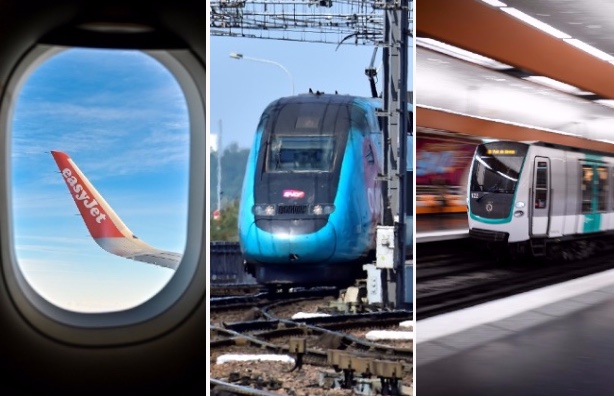 Paris' public transport services came to a virtual halt on Thursday when unlimited strike action begins. Here's how services will be severely hit by the walk-out in protest against the government's pension reforms.

When public transport workers in France strike they are required to give their employers 48 hours notice that they intend to walk out. Once bosses know how many people will be at work, they can then publish strike timetables showing exactly how many services they will be able to keep running.

And in Paris, that does not amount to very many.

Only lines 1 and 14 – which are automated so do not need drivers – will be running a normal service but are expected to be extremely crowded. If the crowds become a safety risk these too could be closed.

On the RER suburban train service line A and line B – which connects Paris to its two main airports – will only be running during rush hour with 50 percent of normal service on line A and 30 percent on line B. READ ALSO Six ways to get round Paris without public transport

The bus service will also be badly hit, with around an average of around one in three services running.

On the city's tram lines 1, 2, 3a, 3b and 5 will only be running during rush hour with one in three of the normal services running.

At this stage it is not clear how long the strike will continue for, but transport bosses are making preparations for at least the first week.

Detailed timetables for Friday will be published at 5pm on Wednesday, but services are likely to be largely the same.

And train services around France?

Just 10 percent of trains will be running in France on Thursday, French rail operator SNCF has announced with mass strike action set to hit the country's transport network.

The best served routes will be the high speed TGV lines between cities, where it is expected around one in 10 trains will run, although SNCF has tried to concentrate what services there are on the busiest routes. So for example there will be six round trips between Paris and Lille, two to three round trips from Paris to Lyon, Marseille, Montpellier, Besançon, Bordeaux, Rennes and Nantes and one round trip to Strasbourg, Nancy, Metz, Reims, Le Mans and Tours.

Intercité routes between towns will be the worst hit, with virtually nothing running – one round trip guaranteed during the day on the Paris-Clermont-Ferrand route, and Paris-Brive and two on the Paris-Rouen-Le Havre route.

On the Transilians suburban commuter trains, around 10 percent of services will run.

These announcements only cover services run by SNCF, but because signal workers will be striking, any train that runs through France could be affected.

Eurostar has already announced dozens of train cancellations for Thursday and Friday and will be running roughly half of its usual services.

And the international Lyria and Thalys routes will also be affected. Lyria – which runs between France and Switzerland – will be running a single return service while Thalys – wich goes to Belgium and the Netherlands – will be running two out of three services.

There will be no trains between France and Italy and France and Germany.

The Eurotunnel will not be affected, nor will cross Channel ferries.

Train companies are offering free cancellation or exchange of all tickets on strike days.

Will air travel be affected? Yes, but not as badly as train services.

Along with the flights, SNCF train services and Metro services in Paris will be hit by mass strike action in France on Thursday.

Scores of flights across the country will also be grounded after several unions representing air transport signalled their intention to join Thursday's strike action against the government's planned pension reforms.

France civil aviation authority the DGAC announced on Tuesday that 20 percent of flights will be cancelled on Thursday which could be just the first day of unlimited strike action that hits transport services in France.

Long haul flights should not be affected by the cancellations, authorities say.

The DGAC has asked airlines operating in France to reduce their number of scheduled flights by 20 percent on Thursday due to ground staff and air traffic controllers joining the mass walk-out.

Air France flights will be badly affected with 11 unions representing various workers in the company having called on them to strike on Thursday.

The company announced that 30 percent of internal flights within France will be cancelled due to the strike and 15 percent of short to medium flights.

Easyjet have also told The Local that some 233 flights will be cancelled to, from and over France and urged customers to visit their website.

“Like all airlines operating to and from France, and using the French airspace, easyJet is expecting some disruption to its flying programme on this date.

“As a result of the strike, easyJet has to cancel a proportion of its French programme and 233 flights, of which 70 are UK touching, have been cancelled. We are also expecting other flights to experience delays.

“Any customers affected by cancellations are eligible for a refund or a free of charge transfer to a new flight.

“Although this is outside of our control we would like to apologise to all our customers for any inconvenience caused and would like to reassure them we are doing all possible to minimise any disruption as a result of the strike action.”

Ryanair has also told The Local it will cancel flights but did not say how many. Customers affected will receive text messages.

The reason some 80 percent of flights will operate compared to just 10 percent of SNCF trains is that not all unions and sectors representing air transport workers have joined the call to strike.

And cities around France

It's not just commuters in Paris who will have to walk or get on their bikes to get to work.

Unions representing transport workers in cities like Bordeaux, Montpellier and Toulouse have all signalled their intention to strike.

In Bordeaux the city's transport authority TBM said services will be “severely disrupted” on Thursday. Tram and bus services in the city will be running but with vastly reduced services.

The tram will only be operating services every 15 minutes and only between 6.30 am and 20.30pm.

Some 40 bus lines will not be operating at all.

Unions will decide on Thursday whether to continue their strike on Friday.

In Lyon only bus services will be affected by the strike with the Metro and tram working as normal on Thursday, for what is the first day of the annual Fêtes des Lumieres festival.

In Toulouse the two metro lines will run as normal but tram and bus services will be severely disrupted by the strike.

When public transport is so badly affected roads around big cities tend to be clogged as commuters use their car to get to work. So you can expect traffic jams especially in the Paris region and around Bordeaux.