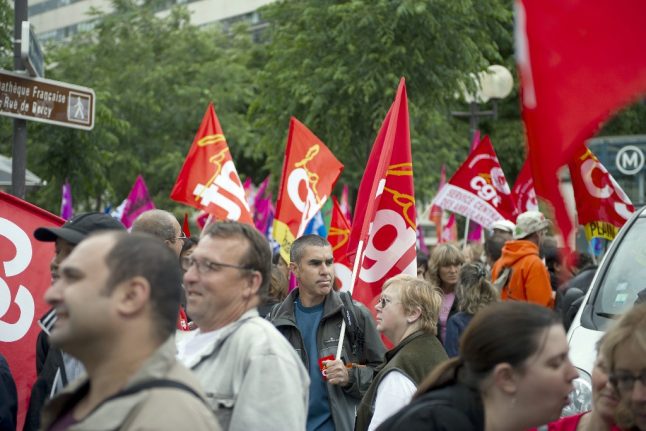 Unions will lead a big demonstration through Paris

The strike has been declared as an 'unlimited' action so no-one knows how long it will last, but as the action launches on Thursday as well as huge disruption on public transport across France we will also see demonstrations, in total 254 marches or rallies have been announced across the country.

Unions are staging a big demonstration through Paris city centre where they will be joined by striking workers and also off-duty medical and police staff, who are barred from striking but who still want to protest. There will be a heavy police presence in central Paris on Thursday Photo: AFP

Strikes in France are generally disruptive but not violent affairs, but this time police are fearing trouble from some 'yellow vests' who say they will protest alongside the strikers to offer support.

The one-year anniversary of 'yellow vests' in Paris was marred by violent clashes between police and a group of several hundred masked black-clad demonstrators who smashed up Place d'Italie.

Fearing more trouble, police have ordered shops, bars and restaurants along the demonstration route to close and advised business owners to secure their premises.

Parking is also banned in areas alongside the demonstration route.

So whether you want to go along and lend your support to the striking workers or just avoid areas of potential trouble, here is where things will be happening:

The main demonstration leaves Gare de l'Est at 2pm on Thursday and travels through the city to Nation.

READ ALSO Unlimited strikes in France in December: What you need to know The march itself will probably take a couple of hours, but police have advised shops, bars and restaurants to stay closed until 7pm.

At recent demonstrations trouble has flared at the end, once the majority of the marchers have left the casseurs (vandals or hooligans) emerge and start to cause trouble.

This is the principle demonstration that has been organised by the unions, but there are other activities planned including another 'yellow vest' march that leave Place de Clichy in the north of the city at around 11.30am and arrives at Gare de l'Est a couple of hours later and an evening 'assembly of 'yellow vests' in Belleville from 7pm on Wednesday.

Many Paris suburbs will also see their own rallies in support of the striking workers, but these are likely to be much smaller affairs that will not lead to trouble.

While the strikes are on we have created a special strikes section of the website – click here for up to date transport information and all the latest strike news.