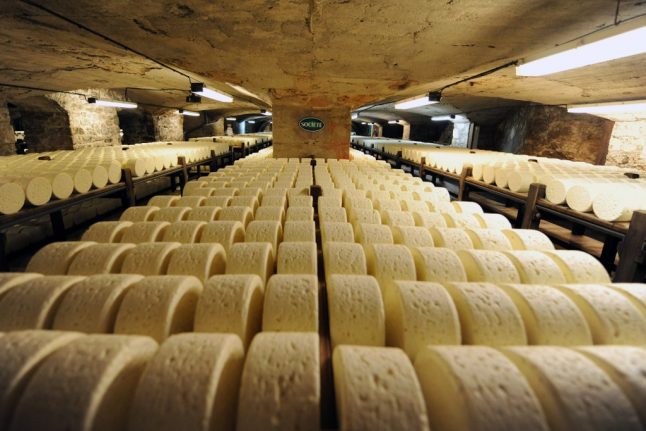 Roquefort cheese is on the list of goods to be potentially taxed by the US. Photo: AFP

Dozens of items are on the list of goods that could be targeted as soon as mid-January after a report from the US Trade Representative's office found the GAFA tax penalises American tech companies such as Google, Apple, Facebook and Amazon.

The decision “sends a clear signal that the United States will take action against digital tax regimes that discriminate or otherwise impose undue burdens on US companies,” US Trade Representative Robert Lighthizer said in a statement.

READ ALSO What is the GAFA tax and why is it only for tech companies? However, despite Trump's repeated threats to retaliate against French wines, only sparkling wines such as Champagne made the tariff list.

The French tax, enacted earlier this year, imposes a three percent levy on the revenues earned by technology firms in France, which often come from online advertising and other digital services.

The tax affects companies with least €750 million in annual global revenue on their digital activities.

The French tax targets revenue instead of profits, which are often reported by tech giants in low-tax jurisdictions like Ireland in a practice that has enraged governments.

The idea provoked fury from the US government when it was announced earlier this year, leading to threats of extra tariffs.

Over the summer it looked like a deal had been reached when France's finance minister Bruno le Maire agreed that the French tax would only last until a global deal on taxing tech giants was agreed, and that companies who had ended up paying more under the French regime could be reimbursed.

However it now appears that the US is pressing ahead with its tariff threat.

The last date to submit comments on the US' proposed actions is January 14th, and “USTR expects to proceed expeditiously thereafter.”

Under EU law, internet giants can choose to report their income in any member state, prompting them to choose low-tax nations such as Ireland, the Netherlands or Luxembourg.

Most tech giants have millions of users in France and make big money – for example Amazon recorded €25 million profit in France last year – but pay negligible amounts of tax.

The European Commission concluded that Apple had paid an effective corporate tax rate of just 0.005 percent on its European profits in 2014 – equivalent to just €50 for every €1 million.
French president Emmanuel Macron has described this system as “crazy” saying that it effectively gives permanent tax haven status to tech companies.

Efforts to find a global solution to the dispute over digital taxes have so far not been successful.

Last month, G20 ministers meeting in Washington opened talks on an international system to tax global tech giants that the Organization for Economic Cooperation and Development hopes would take effect by June 2020.

Earlier this year, the US announced it would put a 10 percent tax on French goods in a dispute over EU aircraft subsidies.

French Finance minister Bruno Le Maire said on Tuesday that Paris would ensure a “strong” response to the latest US threat.

Le Maire told Radio Classique that threatened US tariffs on French goods such as sparkling wine, yogurt and Roquefort cheese were “inacceptable” and warned Washington that the European Union could generate a robust reply.

“We were in contact yesterday with the European Union to ensure that if there are new American tariffs, there will be a European response, a strong response,” Le Maire said.