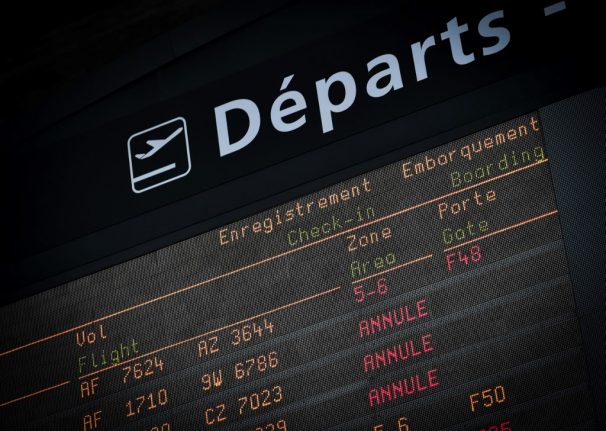 Along with the flights, SNCF train services and Metro services in Paris will be hit by mass strike action in France on Thursday.

Scores of flights across the country will also be grounded after several unions representing air transport signalled their intention to join Thursday's strike action against the government's planned pension reforms.

France civil aviation authority the DGAC announced on Tuesday that 20 percent of flights will be cancelled on Thursday which could be just the first day of unlimited strike action that hits transport services in France.

Long haul flights should not be affected by the cancellations, authorities say.

The DGAC has asked airlines operating in France to reduce their number of scheduled flights by 20 percent on Thursday due to ground staff and air traffic controllers joining the mass walk-out.

Air France flights will be badly affected with 11 unions representing various workers in the company having called on them to strike on Thursday.

The national carrier said 30 percent of internal flights in France will be cancelled as well as 15 percent of short to medium haul international flights.

Easyjet gave a statement to The Local on Wednesday morning confirming cancellations.

“As a result of the strike, easyJet has to cancel a proportion of its French programme and 233 flights, of which 70 are UK touching, have been cancelled. We are also expecting other flights to experience delays,” the statement read.

“Due to an increased volume of calls expected to the call centre, we advise customers travelling o December 5th to check the status of their flights on our Flight Tracker page or manage their bookings using our disruption portal on our mobile app or website at www.easyjet.com.

“Any customers affected by cancellations are eligible for a refund or a free of charge transfer to a new flight.

“Although this is outside of our control we would like to apologise to all our customers for any inconvenience caused and would like to reassure them we are doing all possible to minimise any disruption as a result of the strike action.”

British Airways says their flights will also be affected.

“Like all airlines, our operations to and from French airports and certain airports in Spain and Switzerland between Thursday 5 December and Saturday 7 December may be affected by French Air Traffic Control industrial strike action which is due to take place,” read a statement.

“On Tuesday, we introduced a flexible booking policy for anyone booked to fly between Thursday 5 and Saturday 7 December to or from any French airport, as well as on services to Barcelona, Madrid, Basel, Geneva and Zurich. Customers can move their flights to Tuesday 3 or Wednesday 4 December, or between 8 and 12 December. Here's more info.”

Ryanair has also told The Local it will cancel flights but did not say how many. Customers affected will receive text messages.

The reason some 80 percent of flights will operate compared to just 10 percent of SNCF trains is that not all unions and sectors representing air transport workers have joined the call to strike.

The Local has created a strikes section, so for all the updated transport information and strike news, click here.