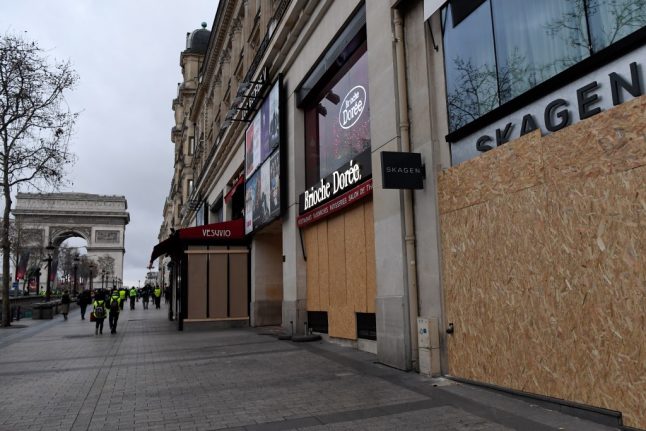 Shops and bars in some areas of Paris have been ordered to close by the Préfecture de Police as police chiefs worry about violence – particularly from some 'yellow vest' groups who say they will be demonstrating in support of the strikers.

READ ALSO 'Unlimited' strikes in France in December: What you need to know There will be union demonstrations on Thursday, but police are concerned about violence from 'yellow vest' or lack Bloc groups. Photo: AFP

In Paris and other cities there will be marches and demonstrations by unions – as well as off-duty emergency workers like police and medics who cannot strike.

But police are particularly worried about plans announced by some 'yellow vest' groups to demonstrate alongside the striking workers to offer their support.

The one-year anniversary of the 'yellow vests' in Paris was marked by a series of violent clashes as masked black-clad protesters trashed the Place d'Italie.

Police are concerned that casseurs (hooligans or vandals) or Black Block will infiltrate the events again.

The order from the Paris Préfecture de Police, published on Tuesday morning, states: “As the forthcoming trade union demonstration will take place in a tense social and protest context – in particular with calls for a gathering of 'yellow vests' – there are serious risks that the violence and damage suffered by the capital since the start of the 'yellow vest' movement are likely to be reproduced on the route the above-mentioned demonstration.”

In response to these fears, police said they would be prohibiting the parking of vehicles along the demonstration route and closing shops, pubs and restaurants along the route and requiring them to install extra protection.

Businesses subject to the closures are those located in the 1st, 2nd, 3rd and 4th arrondissements of Paris – the most central areas. Among the areas concerned are Boulevard de Denain, Place de la République, part of Boulevard de Magenta, Boulevard Voltaire and Place de la Nation.
The closures apply until the end of the scheduled demonstration, set to be at around 7pm on Thursday.
READ ALSO Six ways to get around Paris without public transport