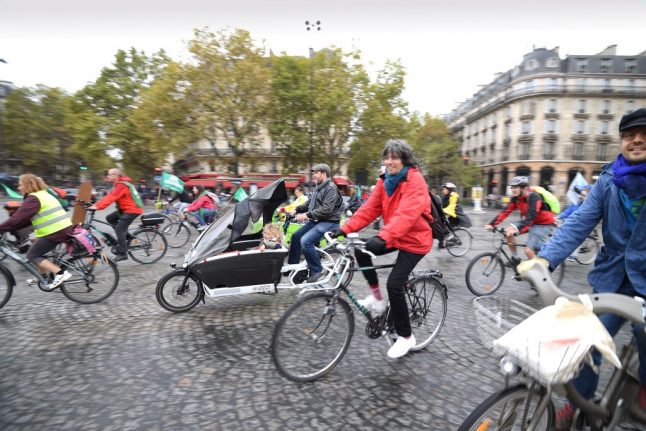 It sounds obvious but Paris really is a walking city and the map below shows just how close Metro stations are to each other. As capital cities go Paris is amazingly compact at only 10km wide. It’s also – famously – a rather beautiful city and walking gives you the opportunity to sight-see as you go.

If you need to go from north to south or east to west to the outer reaches then that would take you about two and a half hours, but if you usually take the Metro for just a few stops then it’s much the easiest.

The map below, created by Guillaume Martinetti shows the walking distances between Paris Metro stations, some of which are as little as three to four minutes for stops on the same line. If you fancy a slightly longer stroll, French newspaper Le Parisien has created this very handy map of all the areas you can cover in a walking time of one hour.

For anyone who doesn’t have their own bike there is always the option of using the Vélib’ bike-share service.

A one-day pass is available meaning it will be free for the first 30 minutes, €1 for the next 30 minutes and the €1.30 per minute for anything above 60 minutes.

There are around 1,300 Vélib’ docking stations in Paris and there are thousands of electric Vélib’ to cater for those who don’t want to arrive at work perspiring.

And there are also other bike operators in Paris like Uber which has rolled out its bright red Jump bikes around the city.

There has been a lot of work recently on creating new bike lanes around Paris, including an ‘RER Velo’ network leading from the suburbs into the city centre, so getting around by bike is getting easier. Paris has cracked down on shared electric scooters since their free-for-all introduction and is planning a referendum on whether they should be banned altogether.

For the moment, however, there are several thousand scooters available for hire from docking stations around the city via company apps.

In general these are recommended if you need to cover distances of around 3km, so not if you need to cross the city because that might leave a hole in your wallet given the rates can be quite high.

One thing you’ll need to note is the rules for being on an electric scooter in Paris. While you don’t need to wear a helmet you’ll face a fine if you get caught riding on the pavement.

And after accidents involving pedestrians, Mayor Anne Hidalgo also ordered the operators to cut the speed of the scooters to 20km/h and banned them from being left on pavements.

READ ALSO: How to avoid falling foul of the new rules on electric scooters In the crippling transport strike of 1995 Paris authorities laid on free river shuttle services to help people get to and from work. Photo: AFP

Paris has a fleet of official Paris taxis – which must operate a fixed rate for trips to and from the airport – and also several VTC firms like Uber.

The VTCs prices change according to demand, so on strike days when there are lots of people using them this could represent a very expensive option, but Paris taxis have standard fares and can be summoned on the street or via phone/app.

There may be certain unscrupulous Paris taxi drivers (unfortunately there are a few) who might try to take advantage of the demand and trick customers into paying more. Read the article below just in case.

READ ALSO: What you need to know about taking a taxi in Paris

If you need to travel a little further and quicker then you could sign up to “Cityscoot”, which has 3,800 electric mopeds on the streets of Paris and numerous surrounding suburbs.

They work in the same way as electric scooters in that you need to locate them and then can leave them wherever you want (apart from on pavements of course). You pay for however long you are using the scooter, but the service generally has a good reputation among users.

Just download the “Cityscoot” app. Cityscoot’s rival Coup has around 1, 700 scooters and operates under a similar system. Given the amount of roadworks in Paris we wouldn’t particularly recommend driving in Paris. This is also a problem on the outskirts of the city as people try to commute in from the suburbs. The most traditionally congested roads in Ile-de-France are, in particular, the N118 at Vélizy-Villacoublay (Yvelines), parts of the A86 and the ring road, or the A1, A3, A4 and A6 motorways as they approach Paris.

Nevertheless there are options if you really think it’s the only option.

You can rent electric cars with operators such as Free2Move, Moov’in Paris and Car2Go which have cars parked around Paris that you just need to leave in marked parking spaces once you have finished the journey (so not on the pavements). If you are coming in from outside Paris then Drivy or OuiCar rental services might be better.

And don’t forget covoiturage (carsharing) services like Klaxit or BlaBlaLines – part of national service BlaBlaCar that specialises in commuter trips.

And if you do make it into the city and have trouble finding a parking space, apps like Zenpark, OnePark, Yespark, oPnGo or Parking Map can help.

The reconstruction is still on track for completion by the end of 2024, the culture ministry told AFP.

“The site is progressing at a good pace,” a spokesperson said.

The authorities have previously given December 8th – the Feast of the Immaculate Conception – as a likely deadline.

It means the 12th century cathedral, which previously saw some 12 million annual visitors, will not be able to welcome attendees of the Olympic Games which Paris is hosting in July and August 2024.

But the sharp spire, added by architect Eugene Viollet-Le-Duc during the cathedral’s redesign in the 19th century and replacing a previous wooden spire that had fallen into disrepair, will be back in place by the end of 2023, the ministry said.

The collapse of the wooden spire was one of the most dramatic moments of the fire of April 15th, 2019. 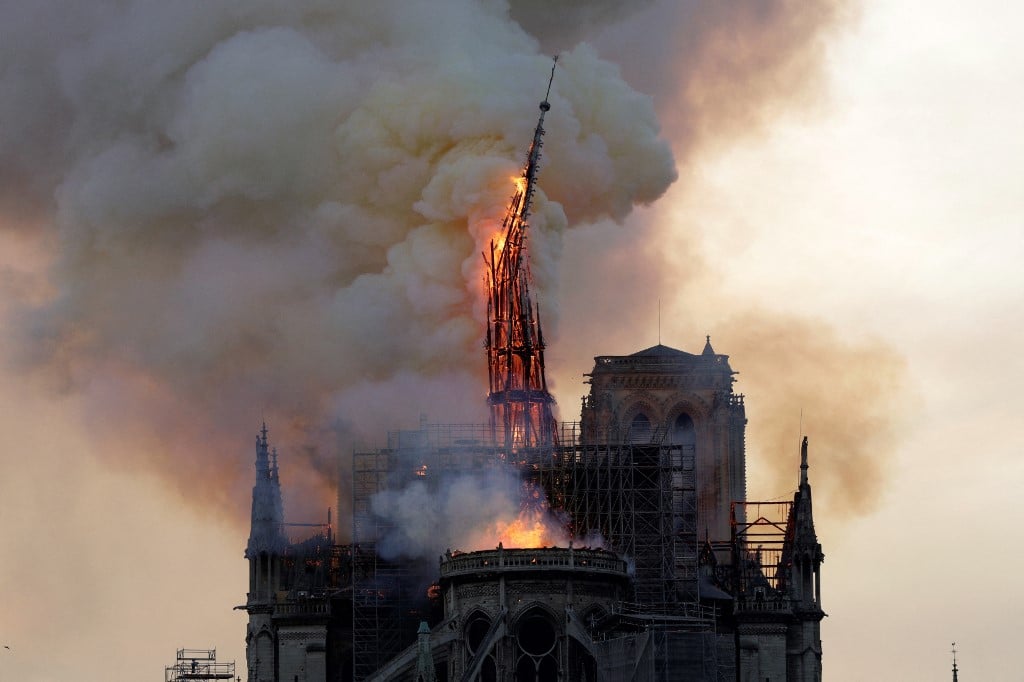 The steeple and spire of the landmark Notre-Dame Cathedral collapses as the cathedral is engulfed in flames in central Paris on April 15, 2019. Photo by Geoffroy VAN DER HASSELT / AFP

An identical version has been made from the same original materials: 500 tonnes of oak wood for the structure and 250 tonnes of lead for the cover and ornaments.

There have been health concerns over the lead debris from the fire, and the use of lead in the reconstruction, with French officials having to reassure their European counterparts that adequate safety measures have been taken.

Preparatory work to start reinstalling the spire began this week, with scaffolding put in place and custom-cut base stones delivered along the River Seine.

Once completed the spire will reach 100 metres high.

Meanwhile, the painstaking clean-up work of the cathedral’s interior walls – a total of 42,000m2 – has been completed, along with that of murals, ironwork, joinery, stained glass and sculptures that survived the fire.

A temporary hangar has been built in front of the main facade for sculptors to restore and replace its statues.

New interior designs are being considered with a winning plan due to be selected this summer.

There was controversy over last year’s decision to include contemporary art among the pieces displayed in the cathedral.

Archbishop of Paris Laurent Ulrich recently said he wanted “an educational and spiritual journey… not the equivalent of a museum”.