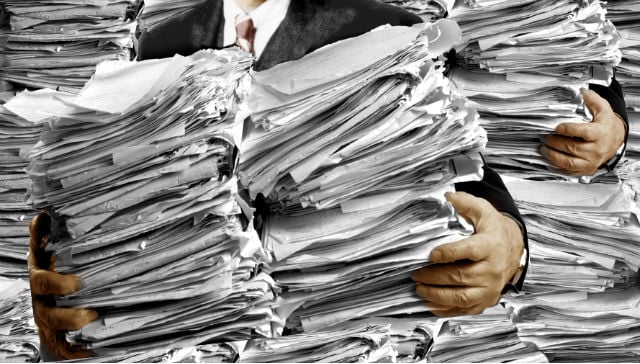 Don't get the wrong name, or you might need to fill in all these forms again. Photo: AFP

You might think that knowing your own name is fairly straightforward – but not when it comes to filling out French forms.

And if you fill out the wrong one, you can end up with your application being rejected and having to start the whole thing again.

So let's look at what's what

Nom – this means your family name/ surname and it almost always comes first in France. On formal letters you will often be addressed with your family name first, usually in capitals.

Often when you are asked to put your nom and prénom on a form, you put your family name first followed by your surname. In other words “SMITH John”.

Prénom – this is your first name. If you have middle names you can add that, but it's not compulsory unless the form specifically asks for all your names

Nom de naissance – this is the family name you were born with. For some people that will be the same as their current name, but anyone who has changed their name either through marriage or for any other reason is required to tell French authorities what name they were born with (unless you have obtained a new birth certificate, for example through adoption).

Nom de famille – this is the same as birth name, they are not asking for your current surname (that is always Nom) they are asking for the surname on you birth certificate.

Nom de patronymique – this is a little old fashioned and not often used, but it means the name as nom de naissance and nom de famille – it's the name on your birth certificate.

Nom de jeune fille – for women only, this is your maiden name – your surname before you got married.

If you've gone through your life with the same surname, it's best to just fill it in on all these sections to make it clear that you have kept the same name throughout your life.

Nom d'usage – this is the name that you use. It's particularly aimed at women, some of whom change their names to their husband's surname when they get married and some of whom don't and doesn't have to be the same as your legal surname.

Nom marital – married name. For use if you have changed your name when you got married. In France when you get married it's up to you whether you want to change your name or not. Your name stays as your original family name on all official documents.

What you are allowed to do, however, is to keep your own family name on legal documents and take your spouse's name – or create a double-barrelled name with your spouse – and use it as a marital name or nom d'usage.

For official purposes, you retain your original name on documents but you can add a married name in the second name field of forms.

If you want this to be the name that you are addressed by, indicate it in the nom d'usage box and letters will be addressed to you using that name. Your official family name for documents, however, remains the same.

If you get divorced you can keep your spouse's name as a nom d'usage – but you will need written permission from your former spouse.

This can create problems for Anglophone women in France, as in the UK and US it is more common after marriage – if you decide to change your name – to change it on official documents like a driver's licence. This can lead to a situation where you are presenting a driving licence or passport and birth certificate with different names on, which French authorities find confusing.

The same applies to nicknames or shortened names – this is an important one because although in Anglophone countries it is common for Katherines to be Kate, Edwards to be Ted or Benjamins to be Ben even on official documents, in France you need to use your full name at all times for anything more formal than a beer with your mates.

Anyone presenting a passport with Benedict on it and a driving licence with Ben on it is going to run in to trouble in France.