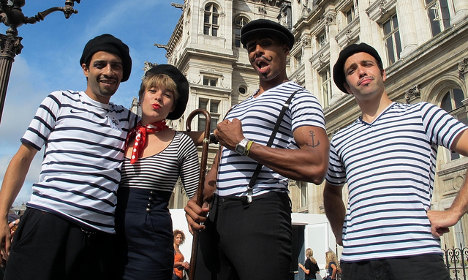 Photo: Photonquantique/Flickr
In the mid 1900s, if you had asked nearly any British person what a Frenchman looked like, you would have got this description: He wears a beret and he rides a bike with onions hanging on the handlebars.
And most of us still recognize the caricature of a French person by his jauntily-placed beret. The onions have been exchanged for a baguette and bottle of wine, but the Frenchman of our imagination just wouldn’t seem French without his trusty beret. Photo: Shawn Spencer-Smith/WikiCommons
The French are often baffled by their beret-wearing image. After all, the beret has never been a head-covering worn by the masses, mostly just artists, soldiers, manual laborers, and movie stars.
So where did this idea of beret-wearing Frenchmen originate? It seems to have taken root on British soil in the 1800s. From there it spread to other English-speaking countries, then on to the rest of the world.
But the British didn’t just dream up this image. There was a very good reason they associated Frenchmen with berets. The French man in a beret, riding a bicycle and carrying onions was actually a fairly common sight all across Great Britain from the mid-1800s to the mid-1900s.
French Onion Johnnies
These beret-wearing, onion-laden cyclists arrived in the UK every summer to peddle their wares. They came from the area around Roscoff, Brittany in northern France (pictured below). This area was (and still is) known for its special pink onions. They were sweet, had a long storage life – and the British loved them. Roscoff, in Brittany. Photo: GoogleMaps
As it happened, many of these onion-sellers were called Yann, a common Breton name which is the equivalent of Jean in French and John in English. The British soon took to calling them “Onion Johnnies”. The Johnnies didn’t mind and happily adopted their new English nickname.
They would go door to door from July through December across the UK, then would return to Brittany. Since the Onion Johnnies were the only contact that many Brits had with a Frenchman, they naturally assumed that all Frenchmen wore berets.
The first Onion Johnny
The Onion Johnny story begins in 1828 when Henri Ollivier figured it would be easier to sail to the UK to sell his onions rather than his usual trip to Paris. His first trip with a few friends was a great success, and was quickly emulated. Photo: Geoff Charles/WikiCommons
Soon, all the would-be onion-sellers got together and organized themselves into companies. Each company had a boss who would go over ahead of the others and rent a building (a barn or warehouse) to serve as an onion depot. The others would follow in July along with the shipment of onions.
When they reached the British shores, they dispersed to their various onion depots where they'd live for the next five months. They often slept on straw in the space they shared with their onions. When they had sold all the produce they had brought with them, another shipment would arrive. But it wasn’t an easy life. Strings of onions were heavy and men could start the day with up to 45 kilograms of onions strung over a pole carried on their shoulders. When bicycles were introduced in the 1930s, it made their work easier and the bicycle became part of their image.
The boss accounted for all onions and made sure the right amount of money came in. This led many Johnnies (especially the young boys who started working around ten years of age) to quote the price and then say, “and a penny for myself, please”.
Rise and fall of the Onion Johnnies
In the early 1900s, there were Onion Johnnies selling their wares in almost every city, town and hamlet in the UK. The peak was reached in 1929 when there were 1,400 Johnnies selling 9,000 tonnes of onions to the British.
After the Great Depression, the trade fell off, and in 1934, only 400 Onion Johnnies and 3,000 tonnes of onions arrived in the UK. Today, Onion Johnnies are practically non-existent, and those in the UK who have a hankering for the pink Roscoff onion can order it online.
The French stereotype
Even though the Onion Johnnies with their berets and bikes are no longer a part of the British landscape, their image lives on in the French stereotype. These hard-working men were just trying to make a living while wearing their regional headgear. They had no idea they were creating a beret-clad stereotype that would follow their countrymen for many years to come.
In 2004 Roscoff opened an Onion Johnnie Museum to honor this almost-forgotten profession.
This story first appeared here on the Curious Rambler blog. Click here to read more from Margo Lestz.