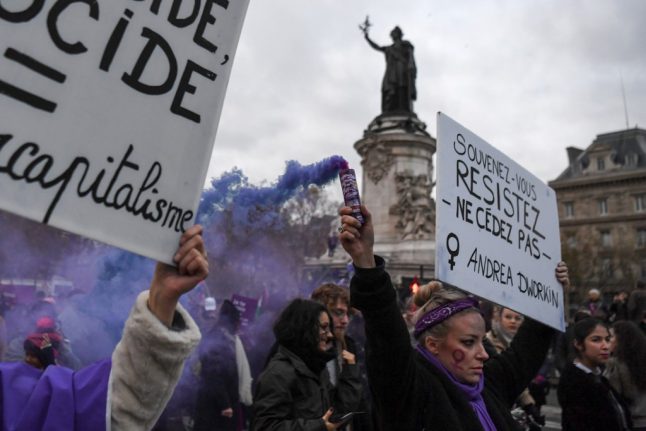 Tens of thousands of people took to the streets all over France on Saturday in a national protest to end violence against women. Photo: AFP

Prime Minister Edouard Philippe unveiled the plan on Monday, saying he hoped the it would prove an “electric shock”, and that the measures would seek to broaden the definition of violence, including how harassment can lead to suicide.

Since the start of 2019, at least 117 women have been killed by their partner or ex-partner in France, according to a case-by-case study by AFP based on media reports.

The figure shows no improving trend. Last year, 121 women lost their lives in femicides. Meanwhile, each year 213,000 women are victims of physical and or sexual violence on the part of their partner or ex-partner, according to the latest official figures.

READ ALSO: The shocking figures that show the fight for women's rights in France is far from over

A plan to end to legal “absurdities”

The announcements by Philippe focussed on ending what he described as “absurdities” and “dysfunctional aspects” in the law to ensure that women would be better protected.

The Prime Minister told reporters in Paris that the notion of psychological “entrapment” would now be written into the law as this can also lead to violence.

In a measure that has been widely called for, the rules covering medical confidentiality would be changed to make it easier for doctors to signal to the authorities when a person is at risk of violence.

Philippe said the new measures would be inscribed in a new bill that ruling party lawmakers will put to the French parliament in January and the plans would benefit from €360 million of annual funding.

“She left him, he killed her”

Tens of thousands of people marched across France on Saturday in actions organised by the feminist group #NousToutes (All of Us) to demand an end to violence against women.

In Paris, a van was blasting Britney Spears' pop-hit Stronger, while scores of men and women waved their purple banners to the music, with statements like “she left him, he killed her,” “one does not kill out of love,” and “the state is responsible.”

READ ALSO: Why French women took to the streets on Saturday At the head of the march was the National Union for Families of Femicide Victims (UNFF), whose members held written signs stating the names of their lost mothers, sisters and daughters. “Priscillia.” “Audrey.” “Marie-Alice”.

The sister of the latter, Hélène De Ponsay, who is deputy president of the UNFF, told The Local last week that she hoped Saturday's march would be a 'wake-up-call.”

After the march, #NousToutes stated that “We marched to make clear our anger. And to demand measures and means that are at the right level. It is now up to the government to act.”

“Not just a question of money”

Equality Minister Marlene Schiappa vowed in interview with the Figaro newspaper that funds would be available for all the new measures while emphasising that the “fight against marital violence is not just a question of money”.

The AFP study published this week , examining every case of femicide in France, showed clear trends, including the failure of the authorities to act on warning signs of the potential for violence