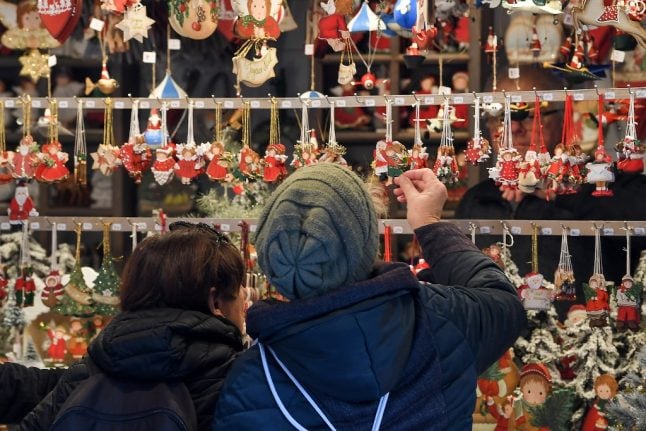 The annual celebrations around a giant Christmas tree will be shadowed by the events of December 11th, 2018 when Cherif Chekatt, 29, went on the rampage at the market.

This year, some 500 members of the security forces will be on duty – in uniform and plain clothes – and checks are being set up around the city centre. “We have no specific elements of concern – terrorist or otherwise – concerning the Christmas market in Strasbourg”, Interior Minister Christophe Castaner told the Dernieres Nouvelles d'Alsace newspaper.

Castener said he wanted to “bring a message of vigilance but also calm, confidence and an invitation to the festivities.”

'Out of the question'

The stallholders who run some 300 wooden chalets selling local produce, souvenirs and Christmas products say they are still haunted by memories of the attack but that the market's work must go on.

Setting out her wares at the stall where she has worked for half a century, Monique Kuprycz-Adam said that the atmosphere was still oppressive but there was no questioning of shunning the event.

“My family has done the Christmas market since 1906. That (closing the stall) would show that we are scared and is out of the question,” she said.

The historic Christmas market, which is being held in the city for the 450th year, is of key economic importance for Strasbourg and other cities and towns of northeastern France.

Every year sees a huge influx of visitors, with 2 million expected in Strasbourg and 1.5 million awaited in nearby Colmar, home to one of France's prettiest markets, to enjoy the shopping and goblets of mulled wine.

The Strasbourg market, which will stay open until December 30th, has a budget of up to €5 million but brings in €250 million in income for the city.

“The Christmas market is something magical for the young, the grown-ups and the elderly,” said Christiane, a pensioner visiting the market on Friday. “We will think about the attack but it won't stop us. Otherwise they will win.” Most of Chekatt's victims were foreigners or had been born abroad. They included a Thai tourist, a Franco-Afghan garage owner and an Italian journalist.

Chekatt, who was on a watchlist of suspected Islamist radicals, had pledged allegiance to the Islamic State (IS) group in a video found by investigators on a USB stick.

But the government dismissed a claim by IS that it was responsible for the attack.

“Whether it's two years, three years, four years, ten years, I personally would still have the sounds of the gunshots in my head and the sparks from the gun,” said Maxime Sengel, manager of a restaurant near where a victim died.

“That's something we can never forget,” he added.

France has been targeted in a wave of attacks claimed by, or blamed on Islamist radicals since 2015.

In the most recent attack, a radicalised employee killed four of his colleagues at Paris police headquarters in October before himself being shot dead.