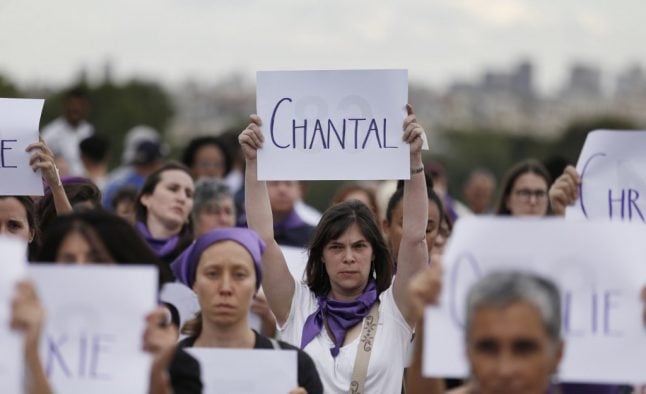 Feminist groups are demanding that the French government opens its wallet to fight the country's high femicide rate. Photo: AFP

Thousands of people are expected to take to the streets in France on Saturday, in a national bid to denounce violence against women.

Saturday's march is organised to mark the International Day for the Elimination of Violence against Women, which falls on Monday, November 25th. Monday is also the day when the French government will present the results of its Grenelle (public inquiry), a long-awaited plan to ameliorate its current support system for vulnerable women.

Where will it happen?

In Paris, the march kicks off at 2pm at Place de l’Opéra. There will be marches and events held in several French cities. Click here to find out what is going on near you.

Saturday's national event is organised by #NousToutes, a French feminist grassroots collective that sprung out of the Me Too movement. #NousToutes are hoping to repeat last year's success, which they proclaimed to be the largest known feminist mobilisation ever in France.

More than 20 feminist organisations and about a dozen public personalities have announced that they too will hit the streets on Saturday. In a letter published in Le Monde, they wrote that they intend to “scream out their outrage against the impunity of violent men” in France.

Does France have a problem with violence against women?

One woman is killed by her male partner or ex every other day in France.

So far this year, 136 women have been killed by their partners, according to the group Féminicides par conjoints ou ex (Femicide by partner or ex). A protest denouncing the violence against women was held in Paris in September, to mark that 100 women had been killed by their partner or ex so far the same year. PHOTO: AFP

What is the government doing to improve the situation?

That’s the big question. We will know the answer on Monday, November 25th, when the government will present the results of its first “Grenelle against intimate partner violence,” launched in September.

France is currently under pressure both from the outside and within for not doing enough to fight violence against women.

A new report, published this Tuesday by a European Council expert group stated that, despite having made several steps of progress, the country’s “figures on violence against women and the impunity of perpetrators remain worrying.”

The report also qualified the existing French support system as inadequate and called for stronger measures to be taken to protect victims of violence.

Earlier this year, President Emmanuel Macron paid a visit to a women's support service in Paris and overheard a phone call where a gendarme was refusing to help a domestic violence victim, wrongly claiming that the law prevented him from helping. Will the Grenelle be a turning point for France?

That's the hope, although organisations remain cautious until the final results are presented. A range of organisations, associations and even family members of victims took part in the Grenelle to offer their expert advice. The plan will contain both political and economic measures to improve the existing system.

Hélène De Ponsay, deputy president of the National Union for Families of Femicide Victims, told The Local that their goal on Saturday is to push for real action.

“This needs to be a wake-up-call,” she said.

“We need to show that we won’t hide. We are not ashamed.”

De Ponsay’s sister, Marie-Alice, was killed in April. Her body was found inside a suitcase, floating down the river Oise. Her ex partner quickly became the main suspect.

“When something this awful happens, the shock is numbing. You don’t know what to do or how to act,” De Ponsay said.

Marching with Marie-Alice’s photo held high is a way of honouring her sister, making sure that no one forgets why she’s dead.