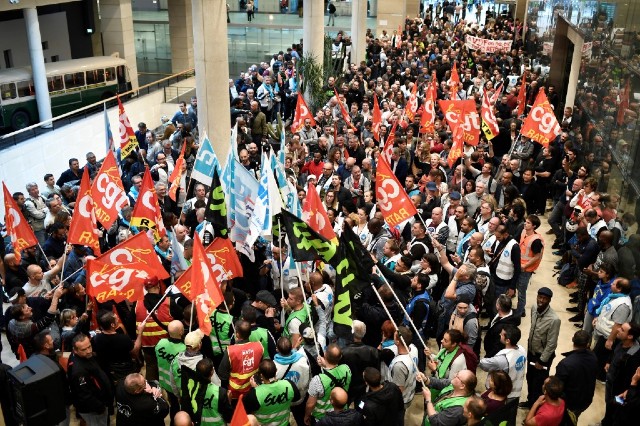 The December strike is shaping up to be a major confrontation. Photo: AFP

The largest French teaching union the SNUipp-FSU told The Local that staff will be joining the walk-out on December 5th, and could even extend the strike to the 'unlimited' action proposed by employees including rail workers.

The December strike is shaping up to be a major confrontation between the government and unions, with railway workers, Metro drivers, bus drivers, hauliers, airline ground crew and postal workers all announcing that they will take co-ordinated action against plans to reform the French pension system.

Teachers are the latest to announce they will walk out, with the SNUipp-FSU saying it is calling on its members to strike.

“It’s not something we do for fun. We would much rather be in class. But we don’t have a choice,” said Francette Popineu, Co-General Secretary and spokesman of the national teacher’s union SNUipp-FSU.

“This is a monstrous reform, with no concern for the consequences it will have for those affected,” she told The Local.

Teachers are already struggling to get by with their current salaries and pensions in France, according to Popineau. She fears the new reform could push them into poverty.

French teachers earn less than many of their European colleagues, with the average teacher's salary in France working out at €30,350 a year pre tax, compared to a UK teacher on €36,247 or a German teacher on €48,571.

“Even Edouard Philippe [the French Prime Minister] has told us that he agrees: we are underpaid. The problem is that there’s no real plan,” Popineau said.

“Now we’re demanding that the government sits down and listens to what we have to say.”

The union has not yet decided whether or not they will continue the strike after December 5th.

“Obviously it’s a complicated situation for us seeing as we are responsible for the children, but we are hoping that the President will present a solution.

“But we are ready to stay on the streets if necessary,” Popineau said.

When French teachers strike, some schools provide a daycare facility with no teaching, but other parents will be faced with making their own childcare arrangements on December 5th and possibly beyond.

A second, smaller, teaching union SE-Unsa has already announced that its members will be joining the strike.