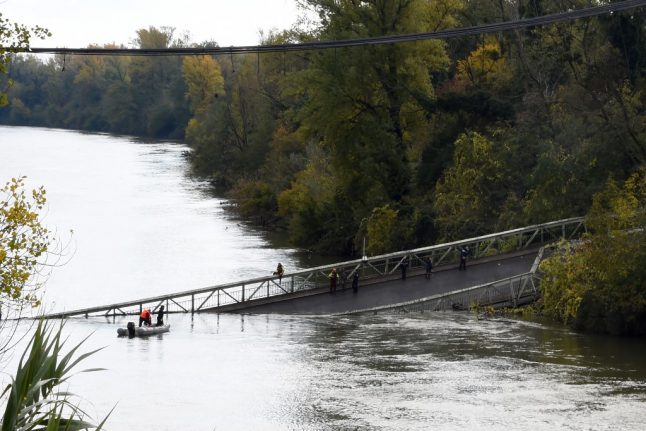 A 15-year-old girl died after a suspension bridge over a river in southwest France collapsed on Monday, causing a car, a truck and a third vehicle to plunge into the water, local authorities said.

The body of the girl – who had been travelling in a car with her mother – was found straight away but the driver of the lorry was swept away by the fast-flowing river. His body was found later on Monday night.

Four people were rescued after the collapse of the bridge linking the towns of Mirepoix-sur-Tarn and Bessieres, 30 kilometres north of the city of Toulouse, the fire service and local security chief Etienne Guyot said.

The central part of the 155-metre bridge, measuring 6.5 metres wide, was submerged by the Tarn river. The bridge leading to the town of Mirepoix-sur-Tarn in the south west France département of Haut-Garonne collapsed at about 8am on Monday.

The girl's mother was pulled alive from the sunken car by bystanders, some of whom were badly injured in the rescue attempt.

Two rescue workers were also seriously hurt, according to the region's security department.

Several people are also being treated in hospital after reportedly diving into the river to try to save the victims.

The 150m long suspension bridge had a weight limit, and initial reports suggested that a large lorry had driven onto it when it collapsed.

The head of the Haute-Garonne départment Georges Meric told AFP that three vehicles were caught in the bridge collapse, without saying what happened to the third.

Over 60 emergency workers were at the scene, he said, adding that an investigation would be carried out into the condition of the bridge.

Local authorities have urged people to stay away from the area and added that as a precaution the nearby Villemur suspension bridge has also been closed.

An investigation into the cause of the accident was underway.

The bridge, dated to 1931, had a load limit of 19 tonnes and was “regularly checked”, Guyot said.

The Haute-Garonne department council said the bridge had undergone a “thorough” inspection in 2017, which had shown “no structural problem”.

Mirepoix-sur-Tarn mayor Eric Oget described it as a “very important crossing point” for people going to work in the regionla capital Toulouse on the other side of the river.

Many pedestrians used the bridge, he said, describing the collapse as a “real trauma” for the local population.

Oget said articulated lorries were not allowed onto the bridge but that some had nonetheless been seen crossing over in the past.

He said he had no information on whether the fallen truck exceeded the allowed weight.

Thousands of bridges in need of repair

In September last year the French government released a report that concluded that thousands of bridges around the country were in need of repair.

A report by the Ministry of Transport revealed that of the country's 164 largest bridges, 23 were in need of urgent construction work.

On Monday local authorities said the suspension bridge at Mirepoix-sur-Tarn was not on the list of bridges in need of urgent repair and was not under close watch.