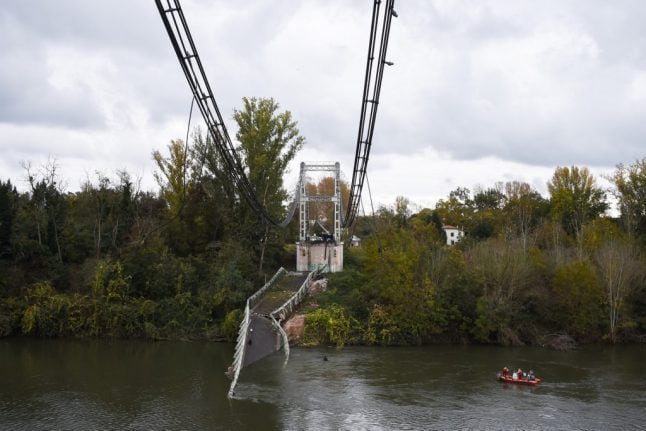 Two people died after the collapse of the bridge linking the towns of Mirepoix-sur-Tarn and Bessieres, 30 kilometres north of the city of Toulouse. Photo: AFP

A teenage girl and a lorry driver both died, and several other people were injured, when a bridge at Mirepoix-sur-Tarn, south west in France, that was used daily by people commuting to Toulouse, suddenly collapsed on Monday morning.

The cause of the accident is still under investigation, although local authorities say they believe the cause was a heavy lorry driving onto the bridge, which had a weight restriction.

“We think that the truck weighed over 40 tonnes. The lorry was well over the limit and the bridge broke,” the mayor of the town of Mirepoix-sur-Tarn, Eric Oget, told AFP.

The bridge, which was built in 1931, could take a maximum weight of 19 tonnes. It had passed recent safety inspections.

The incident prompted renewed scrutiny of the uncertain state of France's bridges.

A report following the collapse of the Genoa bridge in northern Italy last year, killing 43 people, had already concluded that at least 25,000 bridges around the country are in need of urgent repair.

Published in June, the authors called for a 'Marshall Plan' to renovate the ensemble of the country's bridges, to prevent future accidents.

One of the authors of the report, Member of the French Senate Patrick Chaize, told Franceinfo on Tuesday that there is a “lack of awareness” in France regarding the deplorable state of the country's bridges. The collapsed bridge at Mirepoix-sur-Tarn, near Toulouse, was not under close watch by the authorities. PHOTO: AFP

Local authorities said on Monday that the Mirepoix-sur-Tarn bridge was not on the list of bridges in need of urgent repair and was not under close watch. The Haute-Garonne department council said the bridge had undergone a “thorough” inspection in 2017, which had shown “no structural problem”.

“When we called our report Bridge security: Avoiding a Crisis this was exactly to avoid a disaster.

One of the first things that needs to be done, Chaize said, is counting the bridges.

Counting is a necessary step to then establish a general overview of the scope of damages and the degree of urgency of the reparations needed.

Twenty-three were identified to be in urgent need of construction work. Two of them are still classified as in a state of absolute urgency: the Caronte bridge on the A55 in Bouches-du-Rôone and the Echinghen bridge on A16 in Pas-de-Calais.

According to Chaize and his co-authors, the decay of the country's bridges has “gained pace the past ten years.” Many of the bridges were constructed after the war and haven't been properly taken care of since.

There has been a “chronic under-investment,” the authors conclude. They ask the government to increase the amount of money allocated to the maintenance of state artworks from an average of €45 to 120 million yearly from 2020 onward.

They also recommend dedicating €130 million a year to a special fund that local governments may use for security purposes (this fund is now used for maintaining security of the country's tunnels, set to end in 2021).