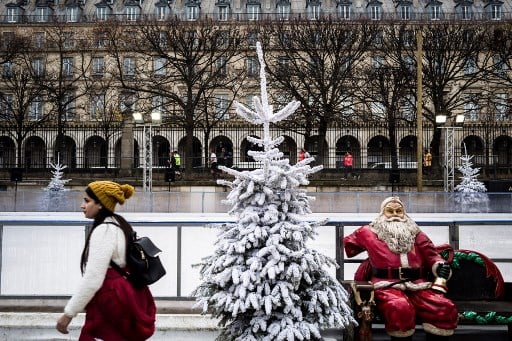 1. Kick it all off with a lantern festival

It’s technically not December, but close enough. On Saturday November 30th, Parc de La Villette is putting on the fourth edition of its annual Lantern Parade. If you want to see the dark waters of the Canal sparkling in the light of handmade lanterns, the parade leaves from Little Villette, in the north-eastern part of Paris, at 5pm. The walk is free, lasts about an hour and wraps up with hot tea.

A great way of getting into the right Christmas mood is by strolling through one of Paris’ many marchés de noël, nibbling on crispy toasted almonds or warm, soft chestnuts. The Christmas markets pop up all over town in December (though opening times vary), so there is plenty to choose from.

Some of the largest ones are the markets by the Eiffel Tower, in the Tuileries Garden, or by the Notre-Dame Cathedral. Other well-known markets are the Abbesses Christmas Market at the top of Montmartre and the Christmas Village at Les Halles.

For a twist, try the Christmas market at Grands Voisins, where ethical trade is in focus. Everything sold is produced locally, by hand. Christmas markets pop up all over Paris in December. PHOTO: AFP

3. Ice skate with a view over the city

One of the coolest ice skating rinks in Paris is La Grande Arche, at La Défense. You skate on top of the arch, 110 meters above the ground, with a panoramic view over the city. Another good option is the Eiffel Tower ice skating rink, which is set 67 meters above ground and also gives you a good view of the capital.

Other options are Patinoire Pailleron, in the north-easthern part of the city, or Patinoire Sonja Heinie, at Quai de Bercy (south-east). On weekend evenings the Sonja Heinie rink keeps open late (12.30am), and you can skate to music and flashing, coloured lights.

Fun-fact: Sonja Heinie was a Norwegian ice-skating champion, credited with the invention of certain performance styles in figure skating. The ice skating rink underneath the Eiffel Tower in Paris opens on December 13th. PHOTO: AFP

4. Go on a night walk through the Jardin des Plantes

Throughout December you can go for a balade nocturne, night walk, throughout the Jardin des Plantes, the famous Parisian garden located on the south-eastern riverbanks of the Seine. The tour is called Océan en voie d’illumination. Tickets are available on the museum's website.

READ ALSO: Eight of the best winter experiences in France

This year the Russian National Opera is performing the Nutcracker, perhaps the ultimate Christmas classic, in France for the very first time. The show is on from December 26th until January 5th at Palais de Congrès, perfect for those spending their Christmas holidays in Paris. Click here for more practical information.

The iconic Swan Lake is also on this Christmas, from December 24th to January 5th, at the Champs Elysées Theatre. This production is Ukrainian, the Kiev National Opera Ballet, which captivated Paris with its own version of the Nutcracker last winter. The Russian National Opera will perform the Nutcracker from December 26th until January 5th at Palais de Congrès in Paris. This male dancer is part of the Hungarian National Ballet. PHOTO: AFP

Proclaiming itself to be a “window into the Africa of today,” Africolor is an annual music festival promoting African artists and music. There are a range of events planned all through December, both inside and outside of Paris. Check out their program here.

7. Immerse yourself in Van Gogh at the Atélier des Lumières

Ready for an all-in experience? The Atélier des Luminères' Van Gogh exhibition is a one-of-a-kind, where you literally walk into the art. It's like being at the cinema, only that the cinema is everywhere (behind you, above you, below you) and you can move freely around the space as you please. It's a pretty magical experience, also thanks to a graceful choice of music. Tickets are available here.

Chocolate lovers will be thrilled to hear that a new pop-up chocolate bar will occupy the Jardin du Marais until January 5th.  The bar sells products made by Pierre Marcolini, one of the few cocolatiers to roast his cocoa beans himself.

Tucked inside the ally of the Hôtel Les Jardins du Marais, visitors may lounge on a large, heated terrasse, devouring French delicacies like macarons, a range of patisséries, and – of couse – hot chocolate.