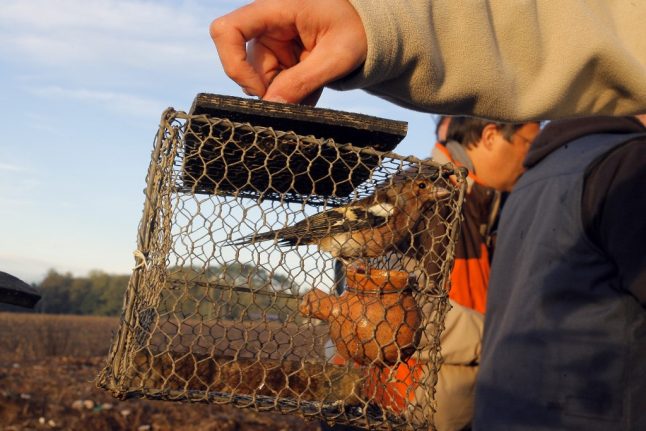 The EU has already issued a warning to France over the practice. Photo: AFP

The new season of glue trap hunting is under way in southeastern France, angering opponents who say the capture of thousands of thrushes and blackbirds in this way every season is “cruel” and have tried in vain to have it banned by French authorities.

The practice is also in the firing line of the European Union, which prohibited it in Spain in 2004 and issued a warning to France in July.

Images of birds struggling to free themselves from the glue have provoked a public debate.

The backlash worries Daniel Portalis, 67, of Marseille, who began hunting as a teenager with his grandfather, but he remains undeterred.

“It is no more cruel than anything else in my opinion,” he told AFP. “But maybe I see it through the eyes of love.”

Among the tufts of thyme and rosemary, he lays out wooden cages containing “calling” birds, or those caught in previous hunting sprees.

Their singing entices other birds to the area, where the glue traps lie waiting. According to the glue trap hunters' association, Portalis is among about 6,000 people still practising this form of hunting in France.

Hidden, apart from a shock of his white hair, he keeps watch from a green hut concealed by a shrub.

After four hours, a bell tied to one of the “glue branches” rings, indicating that a thrush, distinct with its black beak and spotted chest, is stuck to the lime by its wing.

A small wren, also trapped, is released by the hunter. But he quickly takes the thrush in one hand and, with the other, sprays a solvent to dissolve the glue.

Released from the lime but held tightly by Portalis, the thrush is carefully placed in a cage.

The song bird joins about 30 “callers”, used to attract the birds that will be the targets of his shotgun hunting trips later.

Environmentalists say that 150,000 birds die annually from traditional hunting techniques, such as glue traps and nets, at a time when Europe's bird population is free-falling.

A report last year by the French National Centre for Scientific Research found that the number of birds in France's rural areas had dropped by a third in 17 years.

“In the 21st century, how can we allow these barbaric, cruel and non-selective practices to continue!” said Yves Verilhac, head of the League for the Protection of Birds (LPO).

“Those guys should go and play 'boules'!” he added, referring to the age-old game still played in village squares across France often by retired men.

The LPO says that the glue traps are “non-selective”, flouting a 2009 EU directive.

Any kind of bird can get stuck on the traps, losing precious feathers, their freedom or their life, it argues.

“France which sees itself as a biodiversity leader is the last country to officially use” glue traps in hunting, said Verilhac.

Easy to buy, the glue is also used by goldfinch traffickers, a widely poached endangered species, says the National Hunting and Wildlife Agency. Another attempt to stop the current glue trap hunting season is due to go before the Paris-based court on Wednesday.

Traps can only be laid between sunrise and 11:00 am and birds must immediately be removed from them.

For the current season, the French state has set a limit of 42,500 on the number of thrushes and blackbirds that can be caught by glue trap hunting in the southern Provence-Alpes-Cote d'Azur region, the only one in France where it takes place.

The National Hunting and Wildlife Agency has stepped up inspections to number 500 last season.

Compared to the 42,500 authorised glue trap hunted birds, he said that 4.5 million thrushes were killed, most of them shot, annually in France during the hunting season.

“People give their opinion without knowing what they're talking about. They listen to the associations' lies!” fumes Eric Camoin, president of the Association for the Protection of Traditional Thrush Hunting, which has 5,000 members.

“The problem is more ideological than anything else. Activists ultimately want to ban hunting all together,” he said.

The LPO is pinning its hopes on the EU, which already put an end to the hunting of ortolans, considered a delicacy in France.