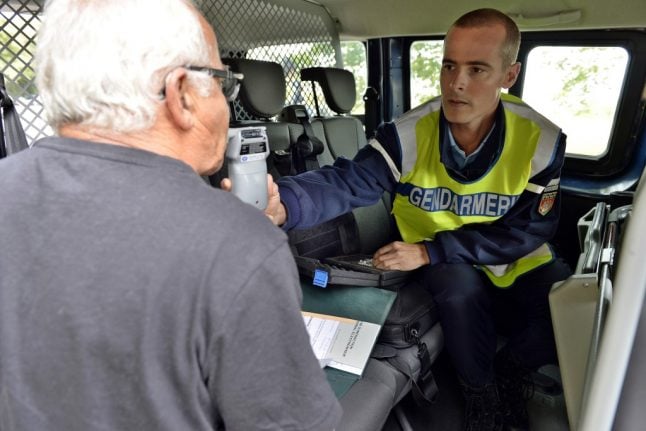 The French drink drive limit is already lower than many other countries. Photo: AFP

Health minister Agnès Buzyn has stated that she wants to lower France's drink drive limit from its current level of 0.5g/L (the equivalent of one small beer or one small glass of wine) to zero.

At this stage it is very much a proposal and hasn't even been brought before the French parliament yet, but her campaign received a boost over the weekend when agriculture minister Didier Guillaume appeared to back her.

READ ALSO What are the penalties if you drink and drive in France? The minister, who as part of his brief represents French wine growers, told radio station RTL: “I think we can party and drink drinks and that drinking French wine is very good. But when you drink you don't drive.”

At the weekends, alcohol is said to be behind 58 percent of all road deaths.

In some, largely rural, areas it is still seen as socially acceptable to get behind the wheel after a couple of glasses of wine, but the French government is increasingly trying to crack down on drink driving.

Earlier this year a new law was rolled out giving drink drivers the option of having a breathlyser fitted to the car, which would not allow the ignition to start unless they provided a sample of less than 0.2g/L of blood.

There are also stiff penalties in place for people caught drunk behind the wheel.

Driving with more than 0.8g/l of alcohol in the blood can lead to a two-year jail sentence, a three-year driving ban or installing a breathalyser in the vehicle, and a fine of up to €4,500.

In 2013, the French government tried to remind drivers of their responsibility by making it compulsory to keep a breathalyser in the car. The idea was that if people were unsure if they were over the limit or not they could test themselves before getting behind the wheel.

However after several years of confusion over its application, the law was quietly scrapped earlier this year.

As health minister, Agnès Buzyn has gained a bit of a reputation as an anti-drinker, stating that guidelines for drinking alcohol while pregnant should be reduced to zero and opposing the sale of alcohol on the terraces of sports grounds.

And in a move that appears to have shocked some of her colleagues, she has even banned wine from being served at lunchtime in the Ministry of Health.