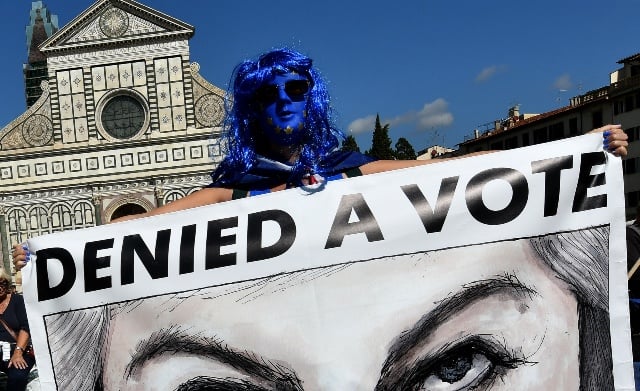 When the votes are counted on December 12th, thousands of Brits in France will not have a voice. Photo: AFP

Elections are looming in the UK and the political discourse is dominated by Brexit – but many of the people whose lives are most directly affected by Britain leaving the EU will not get to have their say.

The British government currently denies the vote to anyone who has lived out of the country for more than 15 years, meaning that thousands of Britons who live in France and elsewhere in Europe will have no voice on December 12th.

Many of the same people were also denied a vote in the crucial Brexit referendum in 2016, even when the result directly affected their lives. With December's election is being seen in some quarters as another public vote on Brexit, given the outcome will have a huge bearing on how if and how the UK exits the EU.

READ MORE: How Britons in France can register for a proxy or postal vote Brexit has directly affected UK citizens living in the EU, yet many of them had no vote on it. Photo: AFP

We asked Britons in France how to feels to lose their vote in the country of their birth.

Hundreds responded and many pointed out that from a practical point of view, they still pay tax in the UK and are directly affected by UK government decisions.

Some 94 percent of respondents said Britons should never lose the vote no matter how long they have lived abroad. Only six percent agreed there should be a time limit after which they lose the vote. The main source of frustration for disenfranchised voters was summed up in this one comment.

“Our voices are not heard, although the whole absurd Brexit drama will impact us the most. No one is listening,” said Victoria Hughes-Crosnier, who lives in Paris.

Many respondents made the point that Brexit affects their lives more than those of British citizens in the UK yet the have no say.

“The decision that is made on December 12th will determine my right to stay and work in France, but more importantly the choices my children have about where they live and work. Yet I do not have a say,” said Jane Niven from the Île-de-France area.

Many spoke of the anger and hurt at being “cut off”, “alienated”, “ignored” and “abandoned” by a country where they spent most of their working lives and to whom they paid their taxes like British citizens at home.

Claire Godfrey, who lives in the Dordogne said: “We are British citizens, many still pay tax in the UK, most of us have family links there and it is totally unacceptable that we are deprived of this basic right!”

Barbara Walton, who lives in Limousin, said: “I'm a British Citizen, the UK is still my home. I depend on the UK for income and pension. I pay tax in the UK and expect to return at some point – might even be forced to return.

“I am living in France because we are part of the EU and I was granted freedom to live and work in Europe. Living in France didn't mean I am less British – until Brexit. Give us back the vote.”

John Shaw, who lives in Lot-et-Garonne said: “Just living outside the UK does not of itself take away your citizenship, and with that right, comes the right to vote.”

While Rachel Nickless, of Le Mans, pointed out: “Many of us have pensions, savings and investments associated with the UK. These are directly impacted by government policies, irrespective of how long we have been out of the UK physically.”

Some respondents said their frustration was exacerbated by the fact citizens from commonwealth countries living in the UK can vote, but they can't.

And many readers felt angry at the way the goalposts seem to have shifted for people who exercised the freedom of movement they were legally entitled to.

Wendy Edmonston, of Charente, said: “I’m angry because I and many like me throughout Europe were not allowed a vote in the 2016 referendum which affects our lives so greatly. We’ve all lived under a black cloud of uncertainty ever since.

“It would perhaps have been a different outcome if we had been allowed our say. And now we’re being ignored again on another crucial vote. I am angry and very, very sad and worried.”

READ ALSO Brexit extension, what do British people in France need to do now Many British people in France still pay tax in the UK, but are denied a vote. Photo: AFP

Of the hundreds of responses we received, many chose to focus on the emotional impact of being denied a vote by the country of their birth.

Gill Pound, who lives in Languedoc, described herself as “angry, powerless, ignored”.

Janet Tarr, who lives in Lot-et-Garonne said she felt: “Completely abandoned and disregarded by my country of birth.”

Gordon Cooke, of Le Mans, added: “I feel unwanted and unimportant to my country.”

While some people pointed out that the right to vote is a precious one that many people throughout history have fought a long battle for. British women have had the right to vote on equal terms to men for less than 100 years.

Tracy Thurling, who lives in Burgundy, said: “People fought and died for the right to vote for everyone – who do the government think it is to deny that right to other people?”

While Dawn Fetwell, of Bordeaux, evoked the spirit of the suffragettes, saying: “What happens in the UK directly affects me and therefore I feel I have a lifelong right to vote. Emmeline Pankhurst will be turning in her grave!” The fight for the right to vote was hard fought and relatively recent. Pictured, the statue of suffragette Emmeline Pankhurst. Photo: AFP
Until Britain leaves the EU, British people who are permanent residents in France are entitled to vote in local elections and European elections.
Only French citizens are entitled to vote in parliamentary or presidential elections.
Although anyone who has lived in France for more than five years is entitled to apply for citizenship many British people living here have not – either for practical reasons like their French not being to the required standard or from an emotional unwillingness to effectively pledge allegiance to another country.
That means that thousands of Brits abroad have been left without a vote in a country.
“It's over 15 years since I have lived in France and after Brexit I won't be European so this means I have no voting power in the world. It's a good job I'm nearing the end of my life, but if i were younger I'd be more upset than I am now at being disenfranchised,” said one respondent.
READ MORE: Why French citizenship is not the solution for many in France
The situation is very different for the French, who not only get a lifelong right to vote, regardless of where they live, but also have 11 MPs who represent French people living abroad.

Conservative governments under both former PMs David Cameron and Theresa May promised to introduce a 'vote for life' for Brits abroad, but so far has not brought the bill before parliament.

It meant that tens of thousands of people were not able to vote in the closely fought Brexit referendum, which for many has turned their lives upside down.

For those Britons in France who can vote in December's election almost 60 percent say they will do so via a proxy vote, with 40 percent opting for a postal vote.

Local authorities in Britain have been suggesting Brits abroad to opt for proxy vote given the short time limit for arranging the elections and historical problems with postal votes. READ ALSO INTERVIEW: For the sake of Britons in France, it's time to pass the Brexit deal and move in to the real negotiations

The answers above are just a small sample of the hundreds of responses we received, thank you to everyone who took the time to get in touch and share their feelings.