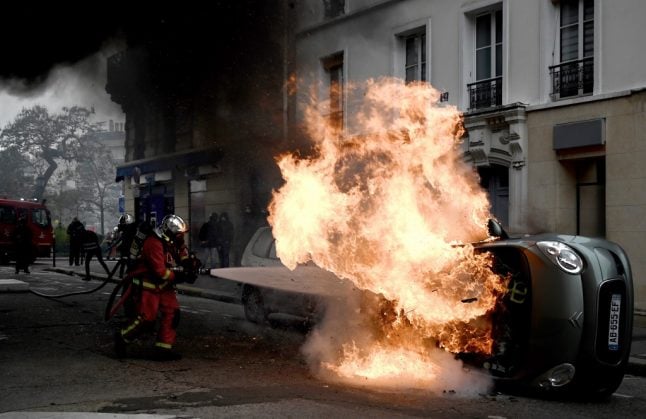 Paris police chief Didier Lallement has described the situation in Paris as 'perfectly under control' after earlier violent scenes in which a small group of black-clad protesters ran amok in the Place d'Italie.

In spite of his confidence, however, there were still sporadic outbreaks of trouble as the evening went on, including a group of masked black-clad men who invaded the Chatalet les Halles shopping centre and let off some kind of small explosives.

Two big marches were planned in Paris – and hundreds more actions around France – to mark one year since the start of the 'yellow vest' protesters. But the march that was supposed to set off from Place d'Italie in the 13th arondissement was called off after a group of demonstrators – mostly young men dressed in black and masked – gathered in the square and smashed up the street furniture and set cars alight.

Police say they were contained in the square and the rest of Paris has been largely peaceful.

An attempt to create a blockade on the ringroad around Paris was broken up by police.

In a press conference on Saturday afternoon, Paris police chief Didier Lallement said: “Even if the images are spectacular on Place d'Italie, the fact remains that the rest of Paris is calm. “Fortunately, there is no destruction in other parts of Paris.”

He said that police had opted to contain the vandals in Place d'Italie.  A total of 61 arrests had been made by 3pm, but police said they would be making more after studying video footage from the square.

He added that there were further protests planned for Sunday and that anyone who attempted to cause trouble there would be dealt with by “great firmness” by police. An HSBC branch has been vandalised by hooded protesters who smashed the bank's glass façade. The same has happened to 13th's town hall, as this tweet by the district's mayor Jérôme Coumet shows.

Footage posted on social media also shows how customers at a Parisian bar had to rush out after a teargas canister was thrown inside the establishment. One client told Le Parisien that the culprit was “not a cop, it was a guy dressed all in black who kicked the tear gas grenade into the bar”.

Numbers attending the protests and levels of violence have sharply diminished in recent months from the height of the movement,which began on November 17 last year with a giant Paris protest that drew almost 300,000 people.

Around France dozens of smaller actions have been ongoing to mark the anniversary, which seem to have been largely peaceful.

But the yellow vests want the actions on Saturday – their traditional day for protests – and also Sunday – the anniversary day – to show President Emmanuel Macron they remain a force to be reckoned with.

“We're here even if Macron doesn't like it” demonstrators chanted as they arrived on the outskirts of Paris Saturday, with others singing “Happy Birthday”.

Several metro stations were closed in the capital and police were deployed in numbers, especially along the Champs-Elysees, which was again closed off to demonstrators following the ransacking of shops that followed a protest last March. France has a long tradition of violent protest, but the ferocity of last winter's demonstrations and allegations of police brutality shocked the country.

Officials said the magnitude of the weekend protests is far from certain but deputy interior minister Laurent Nunez noted a “more pronounced interest” than in previous weeks, and police would plan their deployment accordingly.

“There will be a significant mobilisation but not on the scale we saw in December and January at a national level,” said a French security source, asking not to be identified by name.

“We are expecting a difficult Saturday,” said the source, noting that protesters “mobilise at the last minute in a bid to take us by surprise”.

'Still in the street'

A poll by the Elabe institute published Wednesday said 55 percent of French people support or have sympathy for the yellow vests, although 63 percent said they do not want the protests to begin in earnest again.

The most prominent figures in the movement, which has explicitly shunned any formal leadership structure,acknowledge the declining numbers but say the authorities' response has not been sufficient.

“We shouldn't still need be on the street one year on,” said Priscillia Ludosky, an entrepreneur whose online petition against high fuel prices helped kick off the movement.

“It's unfortunate there has been no political response, but also to see that we are slightly lacking energy in terms of mobilisation,” she told the Regards news site.

The yellow vests — named for the glow-in-the-dark waistcoats all French drivers must carry in their cars — posed the biggest challenge to Macron since he swept to power in 2017 on the back of promises of sweeping change.

They accused Macron of being deaf to the troubles of ordinary French people as he embarked on a major programme aimed at modernising the country.

Initially taken aback by the size and intensity of the movement, Macron offered billions of euros in state aid and tax breaks — and scrapped a planned fuel tax hike — while embarking on a “Great National Debate” at town halls nationwide.

He has also tried to soften his sometimes abrasive style. Just weeks before the protests erupted, Macron told a 25-year-old man looking for a job in Paris that “if I crossed the street I'd find you one”.

“The yellow vests opened our eyes to the reality for millions of people,” Economy Minister Bruno Le Maire said on Friday, adding that the government wanted to respond to this “cry of suffering”.

Apart from Paris, rallies are expected in cities including Bordeaux, Lille and Toulouse, which have often attracted thousands of people.

The next major street challenge to Macron, however, may not come from the weekend's protests but a strike called by unions on December 5 to rally against his planned pension reforms.