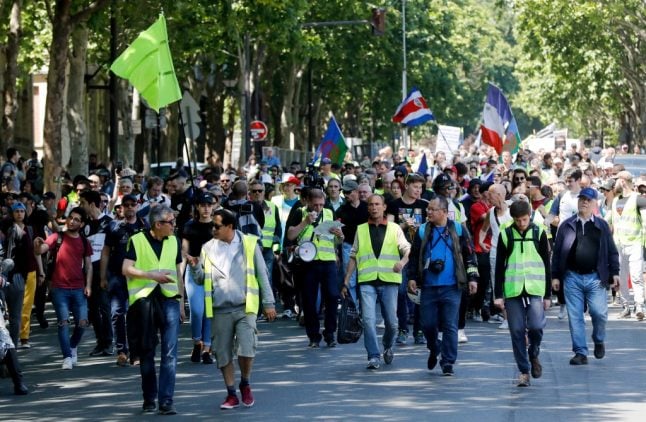 The 'yellow vest' movement will mark one year of protests this weekend. Photo: AFP

Multiple events are being organised, but 'yellow vest' numbers have been dwindling dramatically in recent months. From 282,000 people out on the streets at the movement's peak last winter, the more recent weekly demonstrations have been attracting just a couple of hundred.

Organisers are hoping that the anniversary this weekend will kick-start the movement back into life, but exactly how many people will turn up to the many advertised demonstrations is hard to predict.

There are around 140 protest events advertised on social media, with varying levels of interest – here are some of the main ones.

Possible action on the Champs-Elysées – the famous Paris avenue has been banned to protesters since a group of 'yellow vests' ran amok in March, smashing shop windows and setting fire to restaurants. Despite this, the leader of the 'yellow vest citizens' group Thierry Paul Valette says he has applied for permission from the Interior Ministry to march on the Champs-Elysées. The Paris police department has refused permission, so any protest in this area would be unauthorised.

Thierry Paul Valette also says his group will be staging an Opération Escargot – a rolling roadblock or go-slow operation – on the Arc de Triomphe roundabout at the top of the Champs-Elysées.

READ ALSO ANALYSIS Will Macron really 'tremble' at the yellow vest anniversary? I doubt it Trouble flared on the Champs-Elysées in March. Photo: AFP

Blocking the Paris ringroad – Eric Drouet, one of the movement's main leaders, has called for a blockade of the périphérique that circles Paris starting at 10am on Saturday.

Several Paris shops are also to be targeted in what organisers insist will be a peaceful occupation of “temples of consumption” in the capital. Some of the stores named on Facebook include the Ikea in the city centre, Carrefour at Porte d'Auteuil, Nike  at Forum des Halles, H&M  at Rue La Fayette and an Apple store whose location has not been revealed.

In the greater Paris Île de France region marches are planned in Saint-Denis and Saint-Ouen while in Vitry-sur-Seine there is a BBQ for those who do not want to go into Paris. A protest at the péage at Virsac in November 2018. Photo: AFP

In Bordeaux there is a call to block the motorway toll booth at Virsac – which has been the frequent target of protests since the start of the 'yellow vest' movement – and a demonstration in the city centre starting from Place de la Bourse.

In Nantes a roundabout blockade is called from 4am on Friday, followed by a march on Saturday and then a dance.

In Lyon a demonstration is planned starting from Place Bellecour.

In Montpellier organisers are calling for multiple roundabouts to be blockaded from 8am on Saturday, before a demonstration in the city centre.

Many organisers of regional groups are also calling on people who can travel to join in demonstrations in Paris.