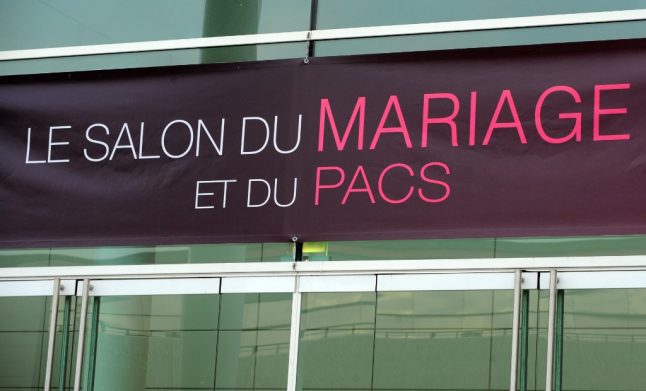 What are the differences between the French civil partnership and marriage? Photo: AFP

Whether you choose to enter a PACS (pacte civil de solidarité or ‘civil union’) or go the whole hog and get married in France, it’s best to first find out what each scenario would mean for you and your partner.

The PACS was introduced to France back in 1999 as a way of giving same-sex couples similar rights and benefits to those given to married couples.

Of course, since 2013 same-sex couple have been able to marry in France but that hasn’t stopped many couples – same-sex and heterosexual – opting for the civil union instead.

It’s become such an accepted part of the landscape that its acronym has become a word – pacsé, meaning people who have entered a civil union.

But each system has advantages and disadvantages.

Here’s what you need to know. Photo: AFP
The basics
Divorcing in France can be a lengthy, complicated and expensive process involving lawyers but if you are pacsé all you need to do is send an official letter off to your local court to inform them of your decision.
READ ALSO: The dos and don’ts of getting a divorce in France (from someone who’s done it) In France, only married couples can jointly adopt a child.

That means that if you are pacsé and would like to adopt, you only have access to individual adoption which means only one of you would officially be the child’s parent.

In fact, adoption isn’t all that easy for couples who are married, with the rules stipulating that a couple must have been married for more than two years or over the age of 28 before they apply.

In terms of social protection, and particularly health insurance, pacsé couples are considered to be the same as married couples.

On the other hand, your partner would not be entitled to your pension in the event of your death if you are pacsé rather than married even if you have children together.

Meanwhile a spouse or divorced former spouse is entitled, on a means-tested basis, to a portion of the deceased’s pension.

When it comes to both income tax and wealth tax pacsé couples are treated the same way as married couples.

READ ALSO Does it make financial sense to get married or pacsé in France?

One of the biggest differences between a PACS union and a marriage in France is that if you are married, even in the absence of a will, the surviving spouse is automatically entitled to a share of the deceased’s inheritance.

On top of that, the surviving spouse has the automatic right to continue living in the family home.

However for the surviving person in a pacsé union there is no automatic right to any of the above. Instead you would have to have written a will stipulating those conditions if that is what you would like to happen.

That means that if you are pacsé then the surviving partner is not as protected as they would be if you were married however you can easily get around this by writing a will.

READ ALSO How inheritance laws and taxes work in France