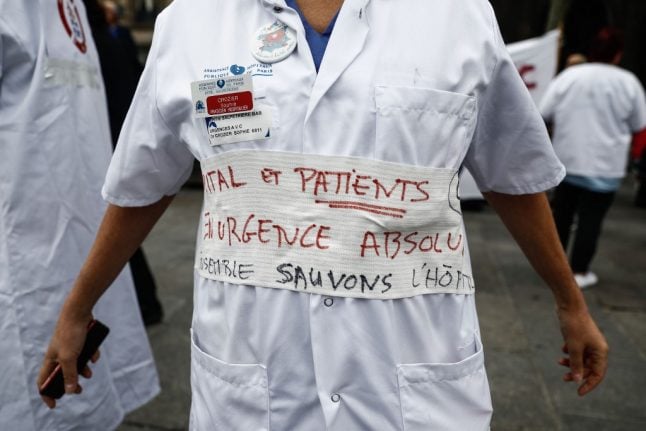 "Critical condition, save our hospitals", reads the message on a protesting French health worker.

Anne-Claire Rafflegeau, a nurse who works in emergency wards in Paris hospitals, is spokeswoman for the protest movement Inter-Urgences.

Her organisation, which unites medics and administrative staff from emergency wards around the country, is leading Thursday's “historic” nationwide strike to protest the ever-worsening conditions for staff and patients in France's hospitals.

Here she tells The Local why the renowned French health system is under threat.

“Budgetary restrictions over many years have reduced our capacity to properly treat and care for patients.

“The government is asking hospitals to make extra savings of between €800 million and a €1 billion even though the system is in crisis.

“They want to make savings but we can't cut any more. We can't do more without putting the lives of patients in danger and undermining the quality of the whole health service.

Quality healthcare in France is a right

“In France access to quality healthcare is a fundamental right. We have one of the best health systems in the world but it's disappearing before our eyes.

“We are fighting to maintain it and to maintain the right of French people to get access to healthcare.

READ MORE: What's gone so wrong at hospitals in France? The nurse says the number of older people and the number of people living in poverty is increasing and putting more pressure on besieged hospitals.

Because there are not enough care options on offer in communities the poor and elderly turn to hospitals for treatment, she says.

Closures of health centres and the lack of doctors in rural areas, a phenomenon known as a “medical desert”, means patients in need of care are left with no other option but to head to the local hospital.

“French governments have not taken into account the ageing population and those who are in poverty. They have been pushed to one side,” she says.

Rafflegeau says the huge turnover of staff is a newer phenomenon which has left hospitals struggling to fill posts and those that are working struggling to cope with the ever greater workloads. The turnover, caused by worsening working conditions which have not been reflected in higher salaries, is having a huge detrimental impact on medical staff.

“These are jobs that bring huge responsibility with them. Workers have been through long periods of study, they work unsocial hours, long nights, weekends, but that is not reflected in their salaries,” she says.

“Their workload has risen enormously which means there is a huge pressure on their mental and physical health.

“The constant cuts have made access to health services more difficult.

“Beds and health units have been closed and patients are getting stuck for hours in emergency wards which puts an added strain on staff.

“Because waiting times for treatment in hospitals have risen considerably that puts a pressure on patients who can become aggressive,” says Rafflegeau.

“The lack of means is putting the lives of patients in danger.”

Now we want to hear from you…