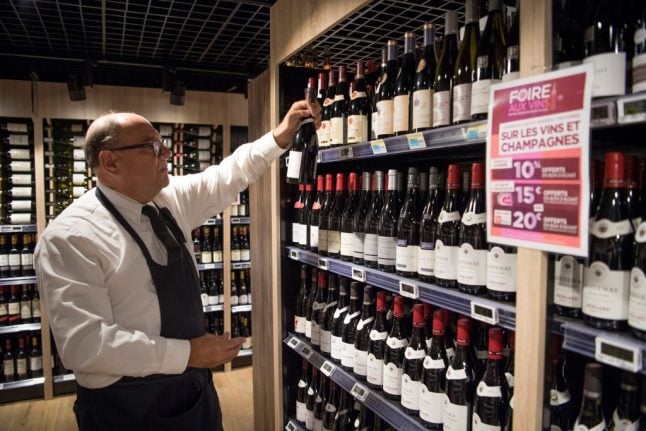 How to choose wine in a French supermarket. Photo: AFP

Just like the French language, French wine feels menacingly full of mysteries to those who are just beginning to learn about it. But knowing the basics about French wine isn’t as hard as you think.

Fortunately, we’ve compiled some tips to help out, courtesy of Stephen Cronk, a Londoner who opened Mirabeau vineyards in the south of France, and Frenchman Laurent Richet, a master sommelier of the twin Michelin star Restaurant Sat Bains in Nottingham, UK.

Screwcaps: For many beginners, the screwcap might seem like a dead giveaway for the bottle to avoid. Not so fast, says Cronk, who noted that if you have two bottles at the same price you should go for the one without a cork. The screwcaps keep white wine fresher for longer and prevent the bottle from being fouled by bacteria in the cork.

“The culture of the cork is nice, pulling the cork out and making that pop is what makes peoples’ juices flow. But if you have an €8 bottle of wine in front of you and one was in a screw cap and one was corked, I’d definitely choose the screwcap,” he said.

Confusing labels: French bottles generally say which region the wine is from, but not the type of grape it’s made with. So for those of us used to grabbing a bottle of Pinot Noir off the shelf, the French system can be tricky. Here are some equivalents:

Wines labelled Bordeaux are made with Cabernet Sauvignon, Merlot and some Cabernet Franc grapes. What’s called Syrah back home will generally be a Rhone region wine here. Burgundy wines are made entirely of Pinot Noir varieties. And if you are looking for a glass of Chardonnay, you’ll want one of the Burgundy whites like a Chablis.

Medals and awards: French winemakers like to advertise on their bottles the awards they’ve won in tasting competitions. They’re helpful, but sometimes the judges get it wrong or just loved something you can’t stand. Some awards are more meaningful than others, though.

“The Concours Général, the one in Paris, that’s the best one in France,” said Cronk. “They are all moneymaking ventures. Everyone wants to get a medal on their bottle no matter how obscure it is, because they know that the consumer can’t differentiate. Medals are a hint, but not a guarantee.”

Buy two bottles: Ultimately wine is a question of taste, so research and advice are really only preparation for popping open a bottle. It’s a good idea to buy one that’s safe, that you already know, but then grab something adventurous. Find a region you like and explore. Though this approach may require of bit of record keeping on what worked or not, it is in the end how the pros build up their knowledge.

Key phrases: French wine labels include some phrases which are indicators of a good bottle. However, it’s important to remember they may mean the bottle is more expensive and it may not suit your tastes. “Grand cru” means it’s a region’s highest quality vineyard or area. Then there’s “grand vin,” which is the title wineries give to their best bottles. “Premier cru” is a step below “grand cru,” but it’s still a top vineyard or area. Above all there is the “grand cru classé,” which has been officially registered as a top winemaking property.

Ask for help: In an only-in-France-type service, bigger French supermarkets like E.Leclerc, Carrefour and Auchan have a designated wine section with a staff expert. Though language is a concern here, wine novices shouldn’t be afraid to approach and ask for advice.

“I would go straight to those people and talk about the budget and what kind of food you are going to prepare and see what kind of wine they would suggest. It’s an easy thing and it’s a great way to discover something new,” Richet said. “I’d recommend bottles from the Languedoc-Roussillon region. I think they are a great value for the money .”

Price does matter: You could literally spend thousands of euros on a bottle but getting a good one at the supermarket just requires not being a complete penny pincher. The really cheap bottles, like ones destined for cooking, are obviously not going to be good for drinking. But for a modest investment you’re going to hit some pretty good bottles.

“There are certain fixed costs in making a wine. Let’s say it costs €2.50 to get it into the bottle. So for a €10 bottle you are getting, in theory, much more on the value of the wine than you are if you’re buying wine for €3,” said Cronk.

Local wines: When you are at the supermarket, choose bottles from the region where you are. The reason for that is local markets will be heavily stocked with wines produced in the area, which gives you a chance to try bottles that are good, but may not be available everywhere.

“I’m from the Loire Valley and the market near me has three or four rows of all local wines. Muscadet all the way to Chinon, Sancerre and so on.”