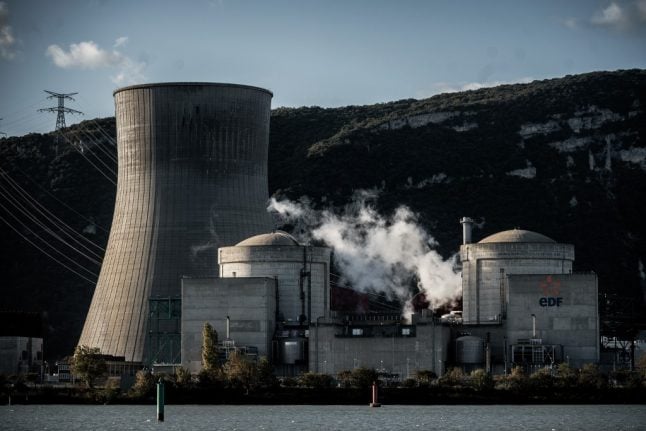 The Cruas nuclear power plant has suspended production after earthquakes in the region. Photo: AFP

EDF took three reactors at the Cruas plant in the Ardeche region offline after Monday's earthquake, which had a magnitude of 5.4 and was felt across a vast area between the cities of Lyon and Montelimar.

The tremors were particularly felt in Teil, just 15 kilometres from the power plant.

The reactors were halted for checks, as required by the law in these circumstances, although no damage has so far been found.

EDF said as a result it was cutting its projection for nuclear energy production this year to 384-388 terawatt-hours (TWh), down from the previous forecast of 390 TWh.

The original forecast had already been cut due to stoppages at other reactors and weather conditions.

The company said in a statement it expected the Curas reactors to come back online progressively in the first two weeks of December, with the three reactors being relaunched successively on December 2, 6, and 16.

It had previously expressed hope that the restart would take place on Friday.

EDF said it hoped inspections on the site would be wrapped up within a week and the results forwarded to France's national nuclear safety body before the final all-clear is given.

“It is a purely administrative delay. It is important to get the authorisation to restart although, to my knowledge, no anomaly has been detected,” said EDF's chief financial officer Xavier Girre in a conference call with analysts.

EDF's nuclear operations have endured a tricky year, with the company repeatedly rapped by the government over delays at flagship projects.

EDF's European Pressurised Reactor (EPR) reactor in Flamanville is now seven years late and massively over budget, there have also been huge cost overruns at the Hinkley Point nuclear project in Britain and the EPR reactor at Olkiluoto in Finland is running a decade behind schedule.

An official report in October chided EDF for lacking a “culture of quality”.