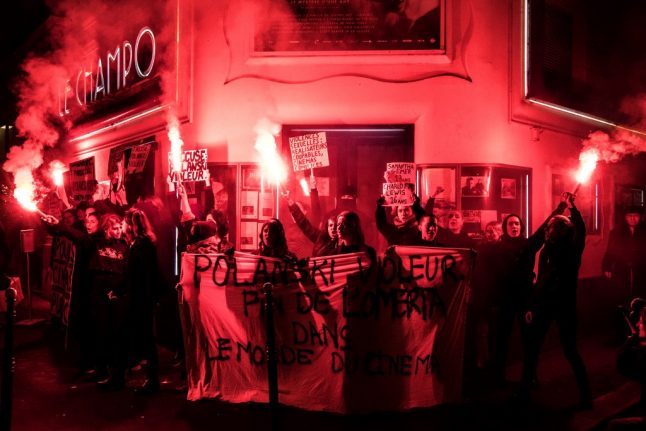 Protests outside a preview screening of the film in Paris. Photo: AFP

The “unconditional support” the director has enjoyed from the French film establishment seems to be crumbling after a new rape claim.

Interviews to promote his new film An Officer and a Spy – which opens Wednesday – have been either cancelled or pulled since a French photographer claimed on Friday that Polanski raped her in 1975 when she was 18 after beating her “into submission” at his Swiss chalet.

A preview screening in Paris' 5th arrondissement was cancelled on Tuesday night after a group of around 30 French feminists staged a demonstration outside the cinema.

The 86-year-old French-Polish film-maker – a fugitive from US justice after he was convicted of drugging and raping a 13-year-old girl in 1977 – has since threatened to sue.

Valentine Monnier claimed Polanski tried to make her swallow a pill when he pounced on her after they had gone skiing in Gstaad. “I thought I was going to die,” she said in an open letter published by Le Parisien newspaper.

Monnier said she felt impelled to speak out after Polanski appeared to compare himself to the hero of his new film, Alfred Dreyfus, the Jewish officer wrongly persecuted as a spy by French army at the turn of the 20th century.

The former actress had previously written to the French first lady Brigitte Macron to complain about Polanski getting public funds to rewrite history to “cover up his criminal past”. But despite vociferous denials and threats to sue the newspaper from Polanski's lawyers, his wife actress Emmanuelle Seigner and Jean Dujardin, the film's Oscar-winning star, have since withdrawn from major interviews on French television and radio to promote An Officer and a Spy.

French public radio – one of the film's promotional partners – also shelved another popular show Monday that featured a pre-recorded interview with Louis Garrel, who plays Dreyfus in the film.

Despite being forced to step down as president of the French Oscars in 2017 after protests by feminist groups, Polanski has weathered previous allegations of rape and sexual assault from other women.

In her letter, Monnier criticised the “unconditional support that (French) artists and intellectuals” have long given Polanski.

But this time his powerful supporters inside the film industry have remained silent.

And in a further blow to legendary film-maker, the French directors' guild, the ARP, could suspend him as early as next week after telling AFP on Tuesday that it supported “all victims of sexual violence and harassment”. The director, who was convicted of rape in 1977 has been accused of beating and raping a second girl in 1975. Photo: AFP

It said it is considering changing its rules so that “every member convicted of a sex crime would be expelled and any under police investigation would be suspended.”

after acclaimed actress Adele Haenel said she was sexually harassed by the director of her first film when she was just 12.

Her lengthy interview prompted an outpouring of support, which many observers saw as a turning point in France's uneasy relationship with the #MeToo movement.

Haenel is so far the only star to speak out in support of Monnier. “I believe her. Her stand is all the more courageous because her aggressor is powerful,” she said.

The actress had earlier poured scorn on those who had defended Polanski, daring them to “read the description of what he did… to the child of 13 on which he forced himself” in Los Angeles.