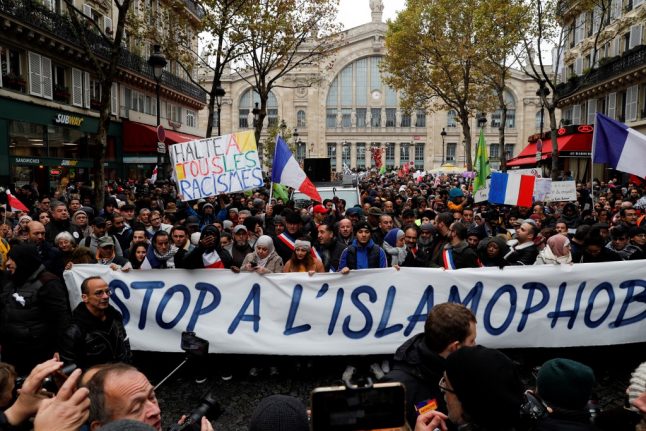 A protest in Paris against Islamophobia on November 10th. Photo: AFP

That is thanks to Samia Essaba, a high school teacher, and Suzanne Nakache, a Jewish former pharmacy owner, and the women’s group Langage de Femmes, or Women's Voices,  which they founded in 2017.

Essaba, a Muslim, is an English teacher in a high school in the rough Paris suburb of Noisy-le-Sec, while Nakache used to run a pharmacy in the ethnically mixed 20th arrondissement of the capital.

They came together to fight the tensions that they saw around them in their daily lives between Muslims, who number around five million in France, and Jews, whose community is about half a million strong. Their mission – to combat the anti-Semitism and Islamophobia that blights French society.

With France in the throes of its latest national frenzy over Muslim women’s clothing, this time the headscarf, and amidst a rise in anti-Semtic attacks, they have their work cut out for them. They aim to bring together women who otherwise would have little chance of ever meeting or hearing each other’s point of view.

“We have women who wear the headscarf, cleaning women, executives from big companies, Jewish women who wear wigs, Christian women from posh areas, and secular women,” Nakache said when The Local met her at a meeting of the Anglo-American Press Association of Paris.

They hold film screenings, social events, and excursions to bring these women together and let them talk and bounce their ideas and opinions off each other.

“We even had a comedy evening where there was a Jewish, a Muslim, and a Christian comic on stage,” said Nakache.

The results have been heartening, according to Essaba.

One woman in the group was a Christian who was verging on Holocaust denial in her speech but after meeting her Jewish counterparts soon saw the error of her ways.

Holocaust denial is a recurrent problem the charity faces. At school kids are taught about the murder of six million Jews during World War II, but at home some are exposed to speech that questions the reality of the Holocaust.

France is in the midst of its latest controversy over Muslim women's clothing. Photo: AFP

Essaba recalls that when the Al Qaeda attacks on New York took place in 2001, a handful of kids in her class – she had many Muslims in her school but few Jews – commented that in the Twin Towers that collapsed “there were Jews, and the Jews control the stock market.”

That was when she decided to become an activist.

“I realised I could no longer be deaf to prejudice,” she said.

Her activism eventually led to her teaming up with Nakache, who was born into the Jewish community in the former French colony of Algeria.

The most striking initiative over the past couple of years has been the group’s annual trip to Poland to visit Auschwitz, arguably the most notorious of the many death camps the Nazis set up in various European countries under their domination.

“We wanted to show what hate leads to,” said Nakache. “That was the fate of Jews then but it might be Muslims tomorrow.”

In 2018 they had around 60 women with them on the charity’s first trip to Auschwitz, and that figure more than doubled to 150 in the trip there in February this year.

And donors are queuing up to give money to what they see as a good cause: Paris city hall, Société Générale bank, the Paris Shoah Memorial centre, and the Paris regional council are among those who have contributed.

READ ALSO ANALYSIS Why do so many French people have a visceral aversion to the Muslim headscarf? Another Auschwitz trip is planned for next March, and again those who cannot afford the €380 fee to cover expenses will be subsidised by other people on the trip or by donors.

“We plan to take Jewish and Muslim women from Israel on the next trip,” said Nakache.

Langage de Femmes rejects any attempt by French politicians or political parties to use it for their own ends, and for that reason its members did not attend a march in Paris last weekend against Islamophobia.

Essaba and Nakache know that the situation is so fraught in France they can only make a small difference.

Nakache for example acknowledges that in some city districts across France Jewish kids cannot attend state school as they would be subject to insults and even physical assault, and their parents end up sending them to Jewish schools instead.

But they plan to keep on trying.