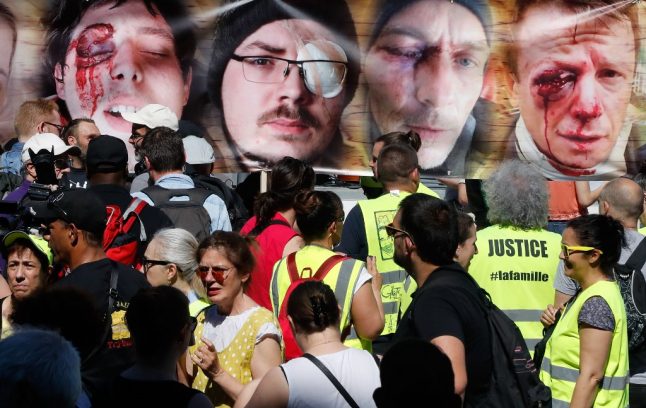 More than 4,000 people - both protesters and police - have been injured since the protests began. Photo: AFP

Participants in the year-old protest movement have long accused authorities of using heavy-handed tactics that have left dozens of people seriously injured.

In particular the use of large rubber bullets from so-called “defensive ball launchers,” as well as sting-ball grenades, have been particularly controversial.

'Yellow vest' activists say 23 protesters lost the use of an eye, five lost a hand, and one a testicle, while dozens sustained other injuries. Activists say 23 protesters have lost the use of an eye and five people have lost hands. Photo: AFP

The two officers were charged over incidents at this year's May Day protest in Paris, a traditional day of union rallies that was joined by yellow vest activists.

One officer will stand trial for allegedly slapping a protester in the face, while the other is accused of throwing a paving stone at demonstrators in Paris – both scenes were captured on video.

Eighteen other cases registered in the capital have been handed to an investigating magistrate – whose task it is to probe the most serious crimes – to decide whether there was enough evidence to press charges, Paris prosecutor Remy Heitz said in a statement on Thursday.

READ ALSO ANALYSIS: The French police are not just thugs, they have been placed in an impossible position

In May, as participation in the weekly Saturday protests since November 17th last year was fading, the interior ministry said 2,448 demonstrators had been hurt in the rallies nationwide, along with 1,797 members of the security forces.

On Thursday, Heitz said 146 yellow vest-related investigations had been finalised by the IGPN police oversight body, out of 212 Paris-based cases signalled by prosecutors.

According to the interior ministry, the IGPN opened 313 criminal investigations in total countrywide into cases of alleged police violence at yellow vest protests, while the oversight body of the gendarmerie was looking into 23 cases.

Fifty-four investigations were closed without charges being pressed, and another 72 were being considered by the prosecution service, Heitz said.