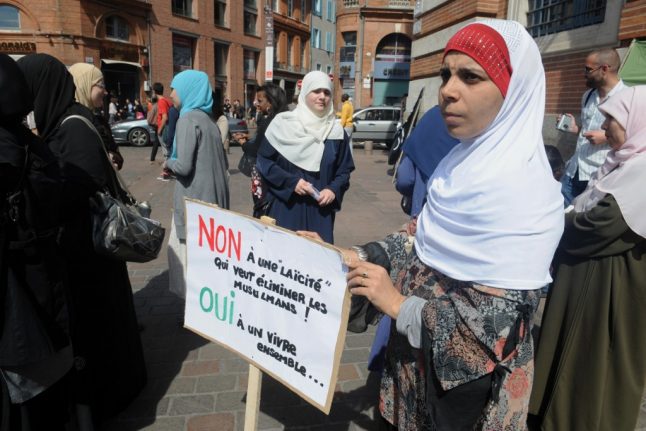 What is the event?

It's a march planned for Sunday, November 10th in Paris, setting off in the 10th arrondissement from 1pm.

It was called after the attack against a mosque in Bayonne on October 28th, when a man with links to the far right tried to set fire to the mosque door, and shot two men who tried to stop him.

But the demonstration is a more general one against all types of Islamophobia in French society. It was launched with an article in French newspaper Libération which was signed by many leading figures in French politics and society.

No, but since the article was published some participants seem to have been having second thoughts, several of whom have either asked for their name to be removed from the list of signatories or announced they will not be attending on Sunday.

Some people have distanced themselves from the event because of the identity of one of the groups organising the demonstration – the Collectif contre l'islamophobie in France – accused of having links with the radical Muslim Brotherhood. Others say they do not agree with all aspects of the text, while some debate whether the word Islamophobia should be used at all in France.

Both the Socialist party and far-left party La France Insoumise prefer not to use the word Islamophobia.

READ ALSO Islamophobia in Paris and London: How it differs and why A demonstration organised by the Collectif contre l'islamophobie in 2010. Photo: AFP

Why is this such a controversial subject?

France has long had trouble reconciling the right to the freedom of its Muslim population to practice their religion with the French secular tradition of laïcité, which states that religion should play no part in state affairs. It is this tradition that is behind the ban on wearing visible religious symbols in government buildings such as town halls and schools.

The law covers all visible religious symbols – from crucifix necklaces to the Jewish kippa – but in recent years there have been attempts to widen to ban on religious attire, the majority of which have focused on what Muslim women wear.

This saw some local mayors banning the full body burkini swimsuit from beaches in 2016. The ban was later overturned by the courts.

More recently a 'runners hijab' on sale at sportswear retailer Decathlon was withdrawn after furious protests – even though there is no ban on the hijab in public spaces – and earlier this year a mother who was accompanying her son's class on a school trip was ordered to remove her hijab.

The niqab – the veil that covers the face except for the eyes – has been banned in all public spaces in France since 2010.

ANALYSIS: Why do so many in France have a visceral aversion to the Muslim headscarf? Muslim mums on school trips are the latest flashpoint in France's debate over the headscarf. Photo: AFP

So are these public arguments leading to a rise in Islamophobia?

The demo organisers say they do. In their manifesto calling for people to attend, they say: “For far too long, Muslim women and men in France have been the target of speeches sometimes from 'political leaders', insults and attacks relayed by certain media, thus contributing to their growing stigmatisation.

“For years, the acts against them have intensified: discrimination, freedom bills or laws, physical attacks on women wearing headscarves, attacks on mosques or imams, even attempted murder.”
According to the Collectif contre l'islamophobie, there were 676 Islamophobic incidents documented in 2018, a rise of 52 percent from the 446 in 2017. Among these incidents, 20 involved physical attacks, 568 involved discrimination, and 88 comprised hate speech. Seventy percent of the victims were women.
A 2018 study by academics from the University of Newcastle found that France has a much higher incidence of discrimination against Muslims in public places than the UK, possibly linked to the ban on headscarves in government buildings which could lead some individuals who are either unsure of the law or are Islamophobic to believe they can discriminate against Muslims.
France saw a big spike in Islamophobic attacks in 2015 following the terror attacks in Paris, with physical assaults on Muslims in the street as well as graffiti and vandalism at mosques. Buts statistics from the National Observatory showed that in 2016 and 2017 the number of attacks dropped to be back in line with pre-2015 levels.
What about the political scene?
In both the 2017 presidential election and the 2019 European elections the second largest party was the far-right Rassemblement National (formerly the Front National). The party leader, Marine Le Pen, denounced the attack on the Bayonne mosque and said it did not reflect her party's values, but many of her public statements have been deeply hostile to France's Muslim population.
French president Emmanuel Macron is acutely aware of the danger of losing voters to the far right, and on Wednesday his government unveiled a series of measures to toughen France's stance on immigration.