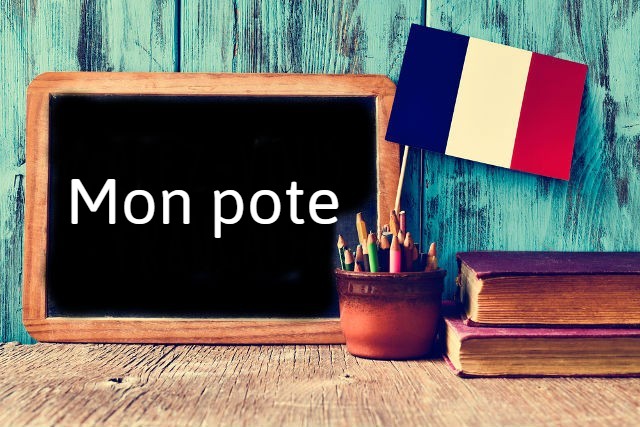 Why do I need to know mon pote?

If you've been in France for a while you will (hopefully) start to make friends and that's where this one will come in handy.

It's a slang term for friend, so it's similar to mate, buddy, pal, chum, bessie or crony.

So if you reckon you've clicked with someone you can describe them as mon pote (my friend) or even mon meilleur pote  (my best friend) if you know them really well.

The word stays the same in the feminine, so a female friend would be ma pote and if you have more than one friend (lucky you) they would be mes potes.

So you could say Mon pote n'arrêtait pas de me rabattre les oreilles avec ce groupe – My buddy was going on and on about this band.

You can also use it if you're talking to somebody, rather than about them.

Tu vas te faire engueuler par ta nana, mon pote – You're going to get a telling off from your missus, pal.

Yes, just like English French has lots of different options for describing someone close to you. There is the more formal ami or amie but there are a number of slang terms. Although rather confusingly many of them can be used to signify either a platonic friend or a sexual partner.

Some of the more common ones are mec, meuf and copain.

Mec is used for men and again can be used for talking about someone or to them, so ça va, mec? would roughly translate as Alright mate?

But if you said Mon nouveau mec est tellement chaud  (My new bloke is so hot) you'd be talking about a romantic attachment rather than a friend.

The female equivalent is meuf – a Verlan version of femme (woman). This used to be used more by blokes to talk about women, and was considered slightly sexist – it would be like calling someone a chick or a honey.

In recent years though it has been reclaimed by woman and you will frequently hear younger girls referring to – mes meufs (my gal pals) or greeting each other with ça va, meuf – OK love?

But if someone refers to mon copain or ma copine it's likely they're talking about a romantic partner. The word is generally favoured by slightly older couples who are in a long term relationship but aren't married.