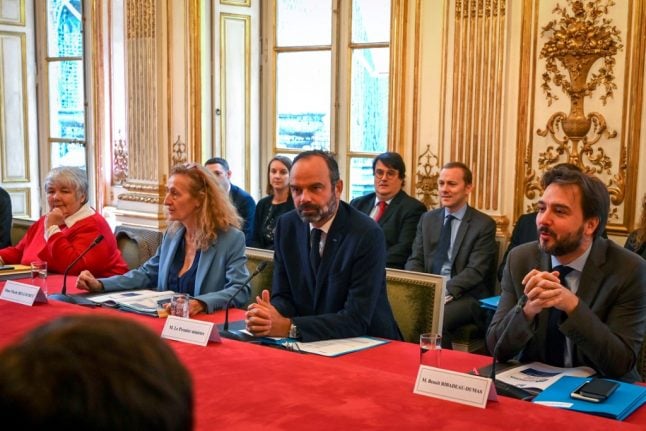 Prime Minister Edouard Philippe presented the “immigration plan” to the French parliament on Wednesday, where they re expected to spark much debate.

“We want to take back control of our migration policy,” Philippe said at a press conference, unveiling a series of measures which he said aimed to strengthen France's “sovereignty”.

It comes after President Emmanuel Macron had signalled a tougher line on immigration in the second half of his mandate, arguing the government must stop voters drifting to the far-right.

“France cannot host everyone if it wants to host people well,” he said. France received a record 122,743 asylum requests last year, up 22 percent from the year before.

Among the measures Philippe announced was a toughening up of the rules around how asylum seekers and migrants can access healthcare in France.

Asylum seekers in France can access vital healthcare via France's Aide medicale d'Etat (AME). According to AFP some 318,000 benefit from the system each year.

But Macron himself has said he wants to end cases where foreigners arrive in France on a three month tourist visa but stay in the country and can access healthcare via AME.

The government also intends to toughen checks on those migrants who claim benefits, with suggestions that some asylum seekers have been able to claim two types on state benefits.

The government will also impose a three month “waiting period” (delai de carence) before asylum seekers can access the basic PUMa (protection universelle maladie) health cover, which is for accessible to anyone who resides in France.

Currently asylum seekers can apply to access the PUMa system as soon as they have lodged their application.

The French PM also announced that the squalid sprawling migrant camps on the northern edge of Paris would be cleared out “before the end of the year.”

READ ALSO What is France's PUMa healthcare system and am I eligible?

Quotas for industries in need of migrant workers

But the measures drawn up by the government don't just revolve around making France a harder place to be for asylum-seekers.

The government wants certain sectors, which are most in need of workers, to be able to recruit migrant workers. The PM has already said that the idea of quotas for economic migrants in certain industries should no longer be taboo.

Philippe confirmed that parliament would in future set annual sectoral “goals or quotas” on skilled migration from non-EU countries, similar to the systems in place in Canada and Australia.

The quotas will be based on a list of professions in which employers would be exempted from having to prove that the job cannot be filled by a French person.

But a government statement detailing the reforms made clear that the new caps on economic migration, which accounted for only 33,000 of the 255,956 residence permits awarded in 2018, “will not be restrictive”.

“The idea is to have quantified targets, or quotas,” the Labour Minister Muriel Pénicaud told BFMTV on Tuesday morning.

“This is about France hiring based on its needs. It's a new approach, similar to what is done in Canada or Australia,” Penicaud told BFM television.

The list of sectors in which companies will be able to recruit migrant workers, will be updated each year in order to keep pace with the ever-changing needs of employers in different regions of France.

Currently employers have to justify why a French citizen cannot be hired in a complex administrative process, which resulted in around 33,000 economic migrants being granted visas last year.

READ ALSO Labour shortages: These are the most needed workers in France

Construction, hotels and restaurants, and some retailing sectors have long complained of a shortage of people willing to take what is often low-paying work.

Penicaud did not say how many foreign workers would be granted visas, nor if an applicant's nationality would be taken into account.

France also intends to put more resources into reducing the time it takes for asylum applications to be processed.

The government passed a law in 2018 aiming to being the average time down from one year to six months, but according to Le Monde newspaper it has failed to have any impact.

The French government also intends to push for greater European cooperation to secure the EU's borders.

Macron has noted France had seen a sharp increase in the numbers of people asking for asylum since the 2017 presidential election and said much tighter  European cooperation was needed.

“There is not enough cooperation in Europe and we need to look at this migratory phenomenon and take decisions,” he said.

The French president, whose first term expires in 2022, is keenly aware that his biggest political rival remains Marine Le Pen and her far-right National Rally party which has built its popularity on a strong anti-immigration stance.

“In order to be able to welcome everyone properly, we should not be too attractive a country,” said Macron.

Family reunification policies – where someone can gain the right to live and work in France on the basis of a spouse or member of their family being here – will not be touched, Philippe added.