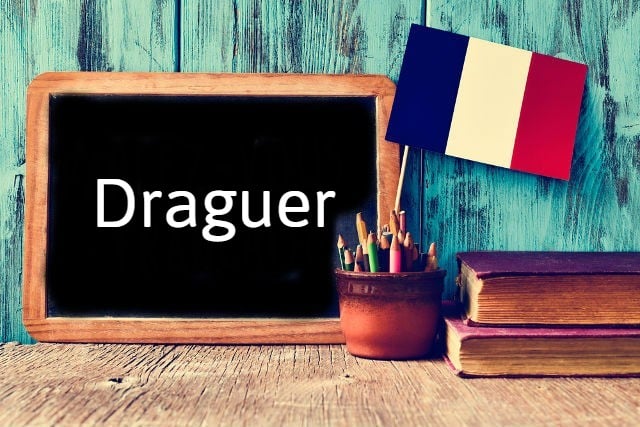 Why do I need to know draguer?

If you work in the dredging or minesweeping industry you may already know this one, but it has an important other meaning that relates to more playful pastimes.

It means to flirt, to hit on, to try and pick someone up – in short it's the ideal word if you fancy trying your hand at the French dating scene.

So if you favour a direct approach to your dating, you could tell the object of your affections Oui, je te drague – Yes, I'm hitting on you.

Conversely if your friendly attempts at conversation have been misinterpreted, you could tell someone Mais faut pas t'inquiéter, je te drague pas – Don't worry, I'm not trying to pick you up.

It's also the ideal phrase for a good old gossip with your friends – Ah Pierre, Il drague tout ce qui porte des talons – Ah Pierre, he hits on everything in high heels.

Or Alors qu'elle m'a dragué – For the record, she came on to me.

It's definitely informal, but it's not rude and you won't offend anyone with this phrase, but given the subject matter it's obviously more likely to be used in an informal situation. (Although in good news, French employment law is pretty relaxed about you employing a bit of drague in the workplace).

If you want some alternative phrases, the verb flirter means pretty much what you would expect it to, or you could also use the slightly more old fashioned séduire – to seduce.

The word does have a more serious meaning, however, as it also means to dredge or to sweep in the sense of minesweeping.

So if you're discussing a silted up harbour you could say Le port doit être dragué plus régulièrement – The harbour needs to be dredged more regularly.

Or someone could inform you Draguer les mines en pleine mer est dangereux – Sweeping for mines in the middle of the sea is dangerous.

Hopefully the context should make clear whether it's silt dredging or flirting that is being discussed.