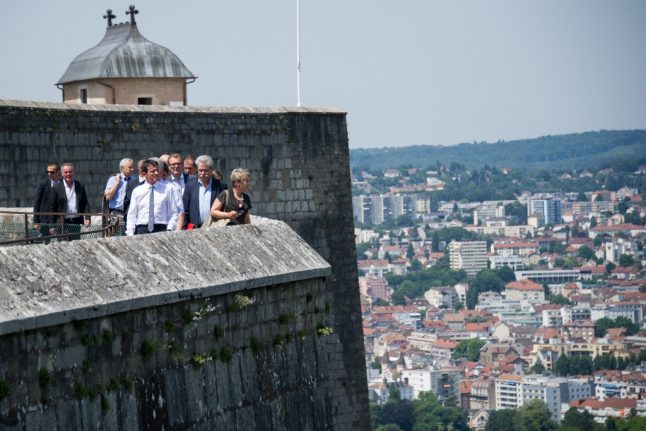 A new ranking has produced the most attractive French towns to live – based on affordable property prices and number of jobs on offer – and in particular the posts that offer permanent contracts.

The ranking was produced by analysing 30 French towns and cities. In each of them, job offers with permanent contracts (known as CDI or contrat à durée indéterminée in France) were identified and reported on a per capita basis.

READ ALSO How cities across France will change in 2019 The French science and tech sector is growing. Photo: AFP

This rate was then related to the average prices per square metre of houses and apartments to give the final rating.

And the big cities lost out in the ranking, with Paris not present in the top 20 and Bordeaux just scraping in at number 20.

Instead the eastern French town of Besançon, near the Swiss border, came top with plenty of jobs on offer combined with a bouyant real estate market.

It was followed by Orléans and the small town of Staint-Etienne in eastern France in the top three.

“Besançon is neither the leader in employment nor the leader in real estate prices, but it represents the best balance between the two,” said Thomas Allaire, founder of employment site jobijoba, which helped compile the data.

“More than 40 percent of the job offers are with permanent contracts, compared to 33 percent in Bordeaux and with the average salary, you can buy 74 square metres of property.”

The top 10 was dominated by towns or smaller cities, with the Grenoble, Rouen, Lyon, Strasbourg, Metz, Caen and Clermont-Ferrand completing the table.

“This listing is the victory of cities that are not in fashion,” Maël Bernier, director of communication for real estate firm Meilleurtaux told Le Parisien.

“These medium-sized cities are never mentioned in surveys of French dreams, and yet it is here that you can find many jobs, while still having the opportunity to support a family in a comfortable way.”

READ ALSO Where in France are the most jobs available Grenoble fell from second to fourth place, but was still listed as an attractive place to live. Photo: AFP

Lille, which had been in second place behind Grenoble in 2018, fell down to 14th place as other towns improved their employment offerings.

Both Lyon and Bordeaux scored highly for the number of jobs, but fell down the table because of their comparatively high property prices.

Marseille, Nîmes and Limoges scored well on property prices but had relatively few jobs on offer – in Marseille the team counted just 6 jobs with permanent contracts per 100 inhabitants of the city.

Meanwhile Paris trailed in at number 26, hampered by its extremely high property prices, which recently crossed the €10,000 per square metre mark.

In general France's employment market is picking up, with unemployment falling to its lowest level in 10 years and several cities rebranding themselves as French Tech centres, introducing measures like subsidised workspaces for people creating start-ups.

READ ALSO Five reasons to start you own business in France

Yet many people in France, particularly younger people, find difficulty in finding a job that offers a permanent contract, instead having to make do with a series of short-term CDD (contrat à durée déterminée) jobs.