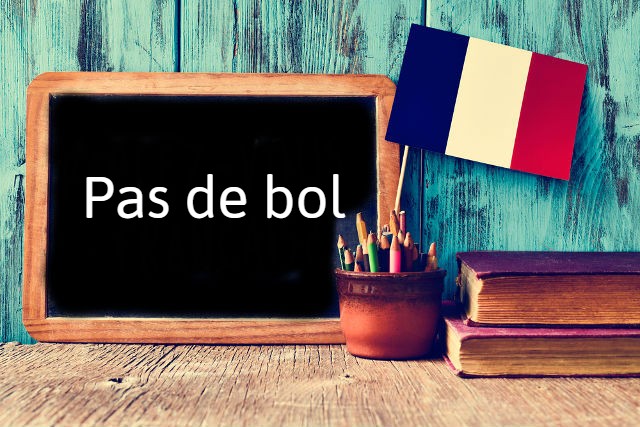 Why do I need to know pas de bol?

You will hear this in more casual conversations as it's a fairly slangy phrase, but it's not offensive and it can be useful when describing a bad situation or offering sympathy.

It literally translates as 'no bowl' but it means bad luck, tough luck or to have no luck.

You can use it to describe somebody – Barry n'as pas de bol aves les filles – Barry has no luck with girls.

Or you can use it directly to someone to commiserate with them.

Tu as encore raté ta promotion?  C'est quand même pas de bol – You missed out on promotion again? I mean, of all the bad luck.

Conversely if you want to describe someone who has good luck, you would say they avoir du bol, for example Un piano lui est tombé dessus, il a du bol d'être vivant – A piano fell on him, he's lucky to be alive.

You can also use avoir du pot or pas de pot in the same way to man good luck/bad luck.

You would think this expression has a fairly simple origin to do with people being fortunate enough to have full bowls of food, but it's actually a bit more bizarre than that.

Pot and bol are historic slang terms for both the anus and more generally the bottom, and in fact avoir de cul (to have an ass) is also used to mean good luck, although it's not heard so much any more. Quite how it came into being as a popular slang term is really anyone's guess, although not having an anus would be pretty bad luck, we suppose.

On a similar note, a popular way to wish someone good luck in France is to simply say merde (shit). It's often used before a performance or a match and is roughly equivalent of the English thespian phrase 'break a leg'.

For more French words and phrases, see our French word of the Day section.