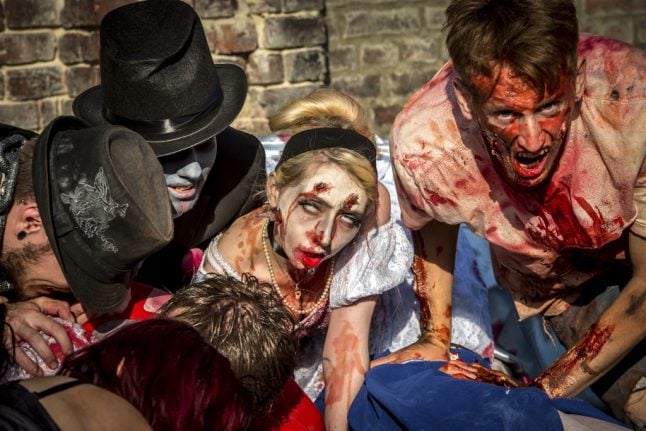 People get dressed up for a zombie walk in Lille, eastern France. Photo: AFP

While the French do acknowledge the event, it’s much less of a big deal that it is in some other countries.

That’s not to say it isn’t marked though – a 2019 survey by Maison Budget found that some 45 percent of French households were planning to put up Halloween decorations in their homes and 37 percent to decorate the outside of their houses with spiders’ webs or witches on broomsticks.

French supermarkets are generally boasting some ready-made decorations around now, and there’s also a couple of shelves of trick-or-treat ready candy and sweets.

That’s because – unsurprisingly – French children have really taken to the idea of roaming their neighbourhood in creepy costumes demanding sugary snacks.

It’s not as ubiquitous as it is in the USA, but you may find you get a few mini ghouls or witches knocking on your door come October 31st.

And one side of the festival that France has really taken to is the blood and gore.

One American in Paris told The Local: “In the States the costumes are a lot more fun, or sexy, but in France they really like the horror aspect.”

There are also an increasing number of events with some cities hosting ‘zombie walks’ and fancy dress events. This year Bordeaux, Toulouse, Strasbourg and Paris are holding zombie events, mostly over the pre-Halloween weekend.

Pumpkin lanterns are a less common, however. Although you will find the vegetable in the shops at around  this time of year, the majority of French people are buying them to cook, not carve.

But in good news, the French do celebrate the season in much more practical way – by giving people the day off.

November 1st, All Saints Day known as Toussaint in France, is a bank holiday.

That means if you’re going to a Halloween party you don’t need to worry about being hungover at work the following day. This year November 1st falls on a Tuesday, one of the few opportunities in 2022 to faire le pont – so expect plenty of your colleagues to have booked Monday as a day off to create a nice four-day weekend.