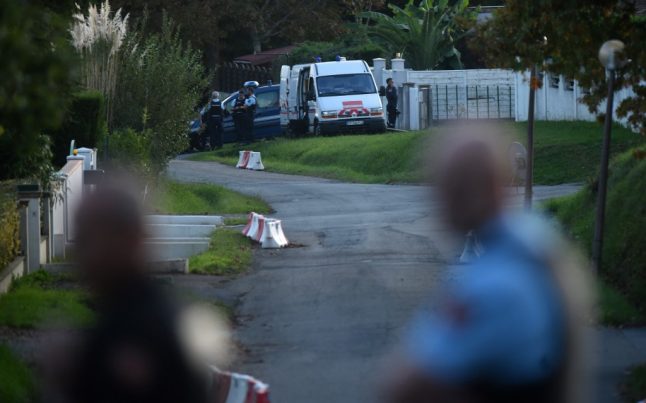 Police outside the home of the pensioner suspected of the mosque attack. Photo: AFP

The octogenarian attacked the mosque as two men were preparing it for afternoon prayers, Bayonne mayor Jean-Rene Etchegaray told AFP at the scene.

The man “approached the building by car and threw an incendiary device against the side door of the mosque,” he said. “The two people came out, he shot at them, hitting one in the neck and the other in the chest and arm. He then fled.”

He was later arrested near his home in the nearby commuter town of Saint-Martin-de-Seignanx after police had cordoned off a large section of the town.

Since his arrest, police say the suspect has confessed to being the shooter.

He has been named as Claude Sinké, a Frenchman who stood for local elections in 2015 for Marine Le Pen's far-right Rassemblement National party, formerly known as the National Front.

Since his arrest, more detail has emerged about the man, who appears to have been well known to local officials in his hometown.

“He was someone who had obsessions,” local official Francis Giraudie told Agence France-Presse.

“He considered that he was not being listened to.”

“He once verbally abused the mayor, I had to intervene to calm him down,” another local official, Bertrand Lagarde, told Le Monde. His frequent unrequested visits and aggressive nature eventually lead to him being banned from the mairie.

Former mayor Lionel Causse told local paper Sud Ouest: “I know the person who is suspected of having committed these acts well.

“Lately, we didn't really hear from him anymore, I even thought he had moved.

“In the past, I had denied Claude Sinké access to the town hall because he came to see me all the time and was verbally aggressive with me and the town hall staff.

“He already had a reputation for making xenophobic and homophobic comments. He ran in the departmental elections under the banner of the Rassemblement National.”

After his unsuccessful election bid Sinké was excluded from the party, said an RN spokesman.
“At the end of the election, the suspect was expelled from his local party for having made comments deemed contrary to the spirit and political line of the RN.
“Since then, he has no longer participated in any action of the movement and is no longer a member,” the party said in a statement.
Party leader Marine Le Pen has joined politicians from across the political spectrum in condemning the attack, saying it was “contrary to the values” of her party.
She tweeted: “The attack on the Bayonne mosque is an unspeakable act that is absolutely contrary to all the values of our movement. These crimes must be treated with the utmost severity.”

Last Friday, Sinké reportedly sent a “furious” letter to the local prosecutor announcing his intention to file a criminal complaint against French president Emmanuel Macron.
A copy of the letter was sent to Sud Ouest, which declined to publish it on the letters page because of its discriminatory, xenophobic and defamatory nature.
Several neighbours told journalists that they avoided conversation with Sinké because when he got onto the topic of politics he became verbally aggressive and xenophobic.
The pensioner is reported to be a former soldier, but had also worked for the department of education and was an amateur sculptor active in a local arts organisation.
At his home police found three guns, which were registered.