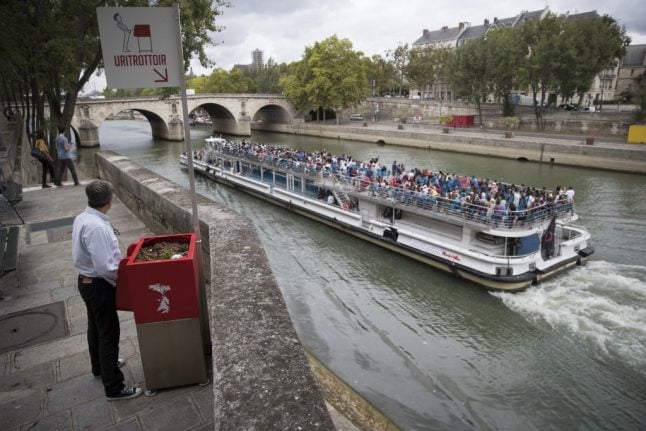 The Paris city official website proudly boasts that the city has a total of 750 public toilets, which it says it a “unique network” in the world despite evidence that other major cities such as London have a pretty impressive public toilet system too.

Paris has 435 “sanisettes” – those are the (supposedly) self-cleaning public toilets found on streets across the city – as well as more than 300 public toilets in its parks.

You used to have to pay to use sanisettes but a few years ago the city made them free in a bid to reduce what is termed pipi sauvage – peeing in the street.

Paris has also deployed temporary urinals – plastic “pissoirs” – for men by the Canal Saint-Martin and on streets where people hang out in the evening drinking and socialising.

And it has boosted to more than 3,000 the number of officials it puts on the streets to fine or else prevent people from behaving badly and doing things like leaving their cigarette butt on the footpath or peeing in public.

Yet despite all this, the whiff of urine – in the street, in the Metro, and in countless other places where it shouldn’t be – is still a dominant feature of life in Paris.

It is much less of a problem in similar cities such as London, whose public toilets are mapped out in the Great British Public Toilet Map, or Berlin, where street peeing obviously does go on but at an apparently much lower level.

Is it because Paris males have little sense of civic duty or because they see it is a rebellious thing to do? Whatever the reason, the public peers seem to be unfazed by the various measures the city has rolled out over the years to stem the flow.

One occasional street-peer named Oscar (who understandably preferred to give only his first name) told The Local that he only does it when he feels he has no other choice, such as when there is too long a queue in a bar or when he can’t find a public loo.

“Personally I try to pee in the gutter or against a tree. You pee in the street if you’re drunk but I don’t really feel that I am breaking the law by doing so. It’s more a matter of bad manners,” he said.

Women, on the other hand, are usually outraged by street-peers.

“I’m absolutely disgusted by the smell of urine at every street corner,” said Marie de Grivel, a long-term Paris resident who lives in the 10th arrondissement which is packed with trendy bars catering to thirsty young people.

“It’s worse in the summer,” said Karine Lempereur, who works at national broadcaster France 2 television. “Blokes go out more, they drink more and then they pee more! And it’s all made worse by the heat. Horrible!”

Lempereur thinks that part of the fault lies with Paris bars and cafés, whos toilets are often tiny and distinctly unclean.

“When there is a queue for the toilet – there is often only one and it is often filthy, and you need to queue for ages – then it’s easy for blokes to go outside and pee anywhere they like,” she said. One of the hundreds of free public toilets in Paris. Photo: AFP

This summer Paris authorities – who provide a handy map of where public toilets are located – have even started erecting large street signs pointing to the public conveniences that dot the city in the hope that it will prevent street urination. But that is unlikely to make much of a dent in the large contingent of street-peeing males who have made their home in the French capital.

One previous failed initiative was the testing of so-called pee-repellent paint which makes the urine bounce directly back onto the legs and feet of the public pee-er, soaking their trousers.

But the plan was abandoned after it was tested in the 15th arrondissement and turned out to be hugely expensive – around 3,000 euros per square metre – and was full of toxic ingredients.

So, despite the fines, the public toilet network, and the disgust of fellow Parisians and visitors alike, the phenomenon – and stench – of street urination is unlikely to disappear any time soon from the most visited city in the world.