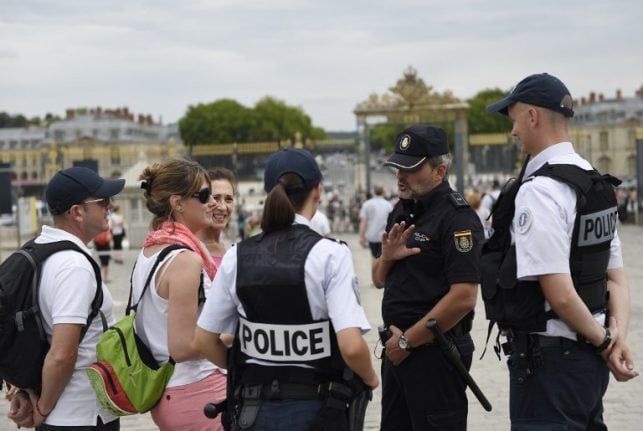 Pickpockets and petty thieves prey on unsuspecting tourists as well as residents, so half the battle is being aware.

But it's important not to be fearful. It's extremely rare for people to be physically hurt and anyone who is a victim of a theft is advised not to chase and try to recover items but go straight to the police station (Commissariat).

The worst that normally happens is that you'll be left with the annoying task of having to cancel bank cards or change email and personal banking passwords.

But there are simple things you can do to avoid the thieves.

There's no reason to have too much cash in your wallet. There are ATMs all over the place and it is always easy to get more cash or just leave some in your hotel safe.

Remember you can pay by card pretty much anywhere in Paris and around France.

And you don't need more than one bank card in there either, so consider leaving the extras in your hotel room.

Watch your bags in the bars

Many pubs and bars in the French capital, particularly those in touristy or trendy areas attract thieves. Don't leave your bag on the back of your chair or anything valuable in the pockets of your coat.

If you pop outside for cigarette or go to the toilet then take your bag with you.

If you are sat at the bar don't leave your phone on the bar. You are asking to be the victim of a distraction theft. Many staff at pubs will warn you about all this or they will have notices advising customers. Take their advice.

READ ALSO: How to avoid the Paris Metro pickpockets If you do happen to find yourself with a wallet full of cash (lucky you), then don't show it off. If you're making a purchase, be discreet, and don't let it be known that the wallet is full. You're attracting all the wrong kind of attention.

Yes, Paris is glitzy and glamorous, but that doesn't mean you should be wearing a diamond necklace while strolling around Montmartre. Save the bling for your evening at the Ritz, or even better, leave it at home. There's no quicker way to ruin a trip to Paris than having your diamonds stolen. Ask Kim Kardashian.

And that point. There have been some high profile snatch robberies on tourists after they had been shopping at Paris's top boutiques. This kind of incident is very rare and maybe hard to avoid but being aware of your surroundings and people will help.

Only use bags that zip up

Pickpockets love to see an open bag, especially if it's slung over the back shoulder of a woman on a crowded Metro. Don't let them get away with it! Use a bag that zips up and carry it over your shoulder at the front. When getting cash out, cover your hand as you're putting in your PIN code. And it should go without saying, but pick a secure-looking ATM in a safe-looking area. Don't get cash out alone in a dark street.

Don’t talk to people at ATMs

It's a fairly common scam in Paris. People, especially minors, will approach you while you're getting cash out. They typically do it right after you've entered your PIN code. Then, one or even two will distract you, perhaps with a piece of paper to block your view while the other enters the largest amount possible and nabs the cash. It might sound impossible, but they're very, very good at it. You might not even notice.

If you're a man who likes to keep his wallet in his back pocket, then get out of the habit in Paris. Thieves will press up against you in crowded places and you won't even notice that the wallet has been lifted. Don't flash your phone on the Metro

Thieves, especially very young ones, love to grab a purse or a smartphone right out of their victims' hands, right before the doors close. So, if you absolutely have to sit by the doors, and if you absolutely have to use your phone, make sure you're holding it very tightly or it might just be the last Candy Crush game you play on it. And believe us, we learned this the hard way (see link below).

Be on guard on Line 9

Line 2 through the Montmartre area can also be a spot for pickpockets and bag snatchers. Don’t allow yourself to get distracted

Another common scam in Paris is for a pair of thieves to approach you while asking for your help. Maybe they'll spill something on you, or ask for directions on a big map, or ask you to sign something. In all the confusion, one of them will be digging through your pockets. Learn to politely say “non merci” and move on.

Distraction methods can get even more extreme. They can include groups of youths having screaming matches, fainting spells, and fake fights. They will do whatever it needs to get your undivided attention.

So be aware for potential fake distractions. Again if they are going to happen it will most likely be on the Metro or at one of the tourist sites.

Don’t draw attention to yourself

This might sound obvious, but you'd be surprised. Please don't go overboard with the tourist gear – don't have a big “I LOVE PARIS” T-shirt, don't have a huge map unfolded at all times, and don't have an enormous camera hanging around your neck. Be subtle, blend in with the locals, and discreetly use the map on your phone. This one is very specific, but it's good to know. There's a common scam in Paris, usually around the Seine River, where a scam artist will approach you and pretend they just found a gold ring on the ground. They will pretend they don't want it, and try and sell it to you really cheaply. That ring is not gold. Don't buy it. Just say “non merci” and move on.

Lastly, don't take the string bracelet that the guys try to give you in Montmartre, especially at the Sacre Coeur cathedral. They'll try and put the string bracelet on you before you've said you don't want it. Heck, they might even call it a friendship bracelet. But when they're done tying it up, they'll ask you for money. And good luck refusing, that bracelet is tied very tightly and you're unlikely to get it off without a knife or scissors. What to do instead? You guessed it. Say “non merci” and move on.