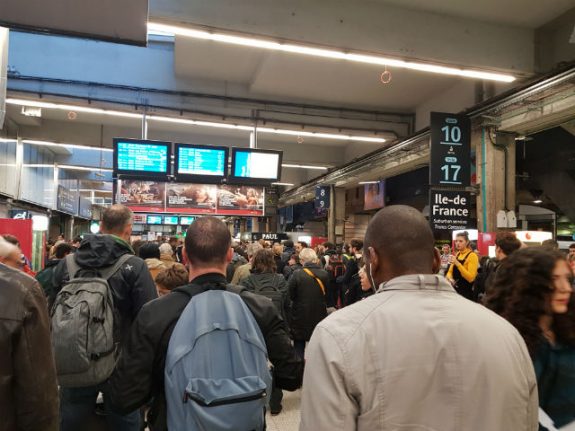 Parisiens at the Paris-Montparnasse rail station wait for more information on Saturday morning. Photo: Emma Pearson
The rail company said that all of its budget OUIGO trains would be cancelled on Saturday, with passengers reimbursed by Wednesday, and that the TER Paris commuter trains, Intercités and some Transilien lines would be “very disrupted”.
The last-minute strike was announced on Thursday evening and is over safety concerns following an accident, say unions.
In Paris this is affecting the RER suburban trains, which are run by SNCF. These connect Paris to the suburbs and also the city's main airports to Gare du Nord.
“Given the current situation of a strike without notice, we expect to have an extremely disrupted Saturday 19 October,” the company announced on the RER's Twitter page late on Friday night.

The Metro, which is run by RATP, is not affected.
Intercity trains from Paris's Gare de Lyon station to Montpellier, Grenoble and Marseilles were still scheduled to depart on time on Saturday morning.
In Lyon's Perrache station, trains to Mâcon and Lille had been cancelled, and a train to Villefranche had been rerouted to depart from another station. But trains to Paris were still expected to leave, albeit with delays of as much as an hour.
Due to the last-minute nature of the strike, there will be changes throughout the day as SNCF struggle to provide a service – passengers are advised to either postpone their trip or check on the SNCF website for disruptions ahead of travel.
Although there have been several strikes recently over the ongoing issue of pension reform, this industrial action is not related to that, say unions.
The reason for the last-minute strike was given as safety concerns after an incident in Ardennes in eastern France.
A train carrying 70 passengers hit a lorry at a level crossing in Saint-Pierre-sur-Vence.

The CGT union said the incident could have had “dramatic consequences”.
A union official told Le Parisien: “The driver was alone and isolated and had to handle a multitude of regulatory procedures and manage users, including several pregnant women, all in a state of shock.”